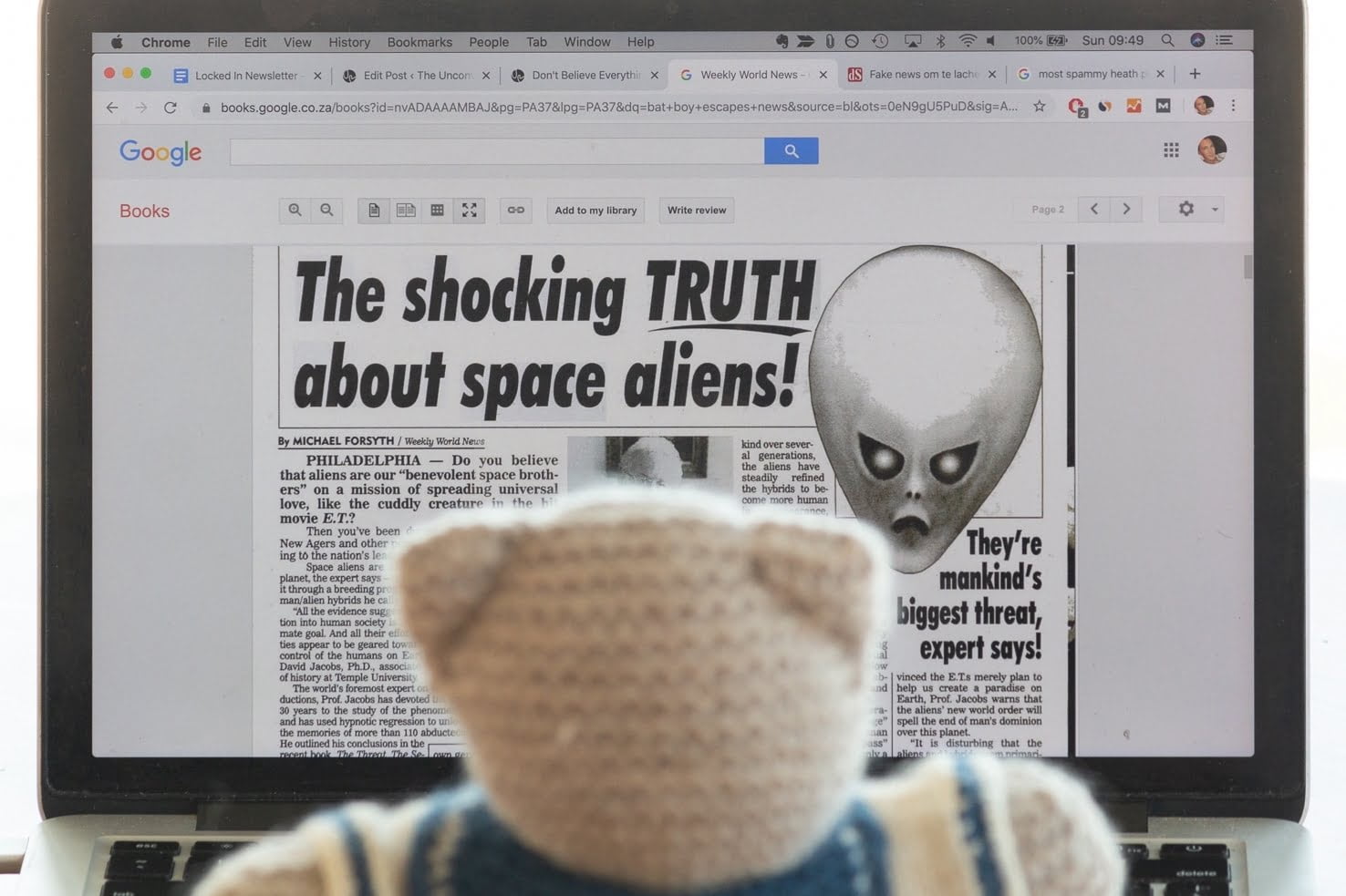 “Don’t believe everything you read on the internet,” is the modern-day, “Don’t take candy from strangers.”

Everybody has heard it and knows it. Everybody tries to abide by the rule. But everybody has given in to temptation at some point and gotten burned.

At least I have. I’ve been inebriated by influencers, fooled by fake news, and swindled by bogus product reviews.

But I like to think the trial and error has honed my BS detector. And the better I’ve got at not believing everything I read on the internet, the more I’ve realized the strategies are the same as knowing which strangers it’s safe to accept candy from.

Here are 9 questions to get in the habit of asking yourself. With them, deciding what to believe on the internet can be as easy as distinguishing creepy dudes in overcoats from friendly grandmothers.

Who is this stranger?

Check their ID on their about page

Every reputable stranger who’s offering you information on the internet will have an about or profile page. There, you can get an idea of whether they’re a subject matter expert, a reputable news source, a conspiracy theorist, or a random bozo blogger like me.

If you can’t find this info or you still have doubts, do a quick Google search of the site or person’s name. The pages that come up should give you an idea of their trustworthiness.

Why are they being so generous?

Figure out why they’re trying to feed you information

The internet doesn’t have many sweet old grandma types who altruistically hand out wholesome information. Most info givers have ulterior motives. They either want pageviews for ad revenue, to sell your something, or to promote their idea or agenda for their benefit.

Take me for example. My motives are to make money from the ads you may see while reading this post and win you over to our “live uncomplacently” mission and join our Unconventional Monthly community. So I have some incentive to entertain you to keep you on this site, but little incentive to lie.

That’s not the case on all sites. Uncover those motives to decide how much to believe what you’re reading on the internet.

How irresistible is it to you?

Let’s switch analogies momentarily. Information you desperately want to be true will look like a refrigerator-sized teddy bear at a carnival. For you, this teddy bear may be:

What if you were offered something unappealing instead?

Ask yourself, “What if I read the opposite?” Going back to the previous examples:

Would you just a hungrily accept this opposite information? Or would you feel the urge to ignore it and disprove it? The latter is a good sign your confirmation bias is messing with your BS detector. Be careful.

Protect yourself from yourself

Your brain’s biases will mess up your decision making beyond deciding what to believe on the internet. And you can’t stop your brain from doing it. The only way you can protect yourself is to understand what’s happening.

We share some strategies on our post about how to to keep an open mind. Read the book, Mistakes Were Made (But Not By Me), for more detail.

Where does it come from?

Check the ingredients before swallowing

Just because some internet stranger stuffs seemingly trustworthy stories, studies, statistics, or quotes into what they’re telling you doesn’t make it so. There’s a decent chance they have:

Google crucial facts within anything you read on the internet and click the links to get the whole truth straight from the source.

How many others also want it?

Crank up your BS detectors to full blast on topics that are the center of attention. Upcoming elections and the current pandemic, for example. When so many people are interested, predators come out in full force to lure innocents with their noxious lollipops or lies.

Conversely, you can relax a bit when you’re looking for information on an esoteric topic. What wigs were made of in the 17th century, for example. It’s not worth predators’ effort to chase after so little prey. Only people who really care about these topics will write about them online.

Stratechery has a good post with more on this topic.

Are there any alternatives?

Look for sources of conflicting information

See if you can’t find another online source that debunks or says the opposite of whatever information someone’s trying to feed you. For example:

Read through the comments sections, Reddit threads, and negative reviews to identify arguments against the information you’re tempted by. This input can be even less trustworthy than the original sources themselves, but at least they’ll broaden your perspective.

Can you ask a grown-up?

Turn to sources of information you can trust

It helps to have people and sites you can trust. They’ve often done the fact-checking for you already.

Is it stale or counterfeit?

Sometimes internet information sources will change or conceal the published date to trick you into thinking the information is fresher than it really is.

Look in the comments to see how long the post has really been around. If there are no comments, plug the URL in the Wayback Machine.

Are the images fake or unrelated?

People believe what they read on the internet more when it comes to images. Fraudsters know this, so they make fake photos or use ones that look like they’re relevant but are from completely unrelated times and places. Do a Google image search to catch this.

Don’t buy if they don’t have their own images

Only trust product review sites that have their own photos of the product. Any site that uses stock photos likely never bought and used the product, so their advice is worthless.

It’s bad enough to swallow false information from a stranger on the internet. Passing it on to your friends is much worse. You’re endangering them and making yourself look bad.

Only share anything you read on the internet if it comes from a site you have complete faith in or you’ve done heavy due diligence.

In the spirit of not believing everything you read on the internet, here are more resources from more qualified people than me:

Be Careful Out There!

But don’t be too careful. You’ll never learn anything if you don’t believe anything you read on the internet.

Just keep the above questions in mind and practice honing your BS detector. It gets easier the more you do it. Believe me. (Or don’t.)

Quit the News? 15 Thought Experiments That May Change Your Mind

Join 3,000+ free-spirited folk who get free ideas about freeing ourselves from the status quo twice a month. You're free to unsubscribe anytime.