Home > Success > Be Your Best > Your Future Self 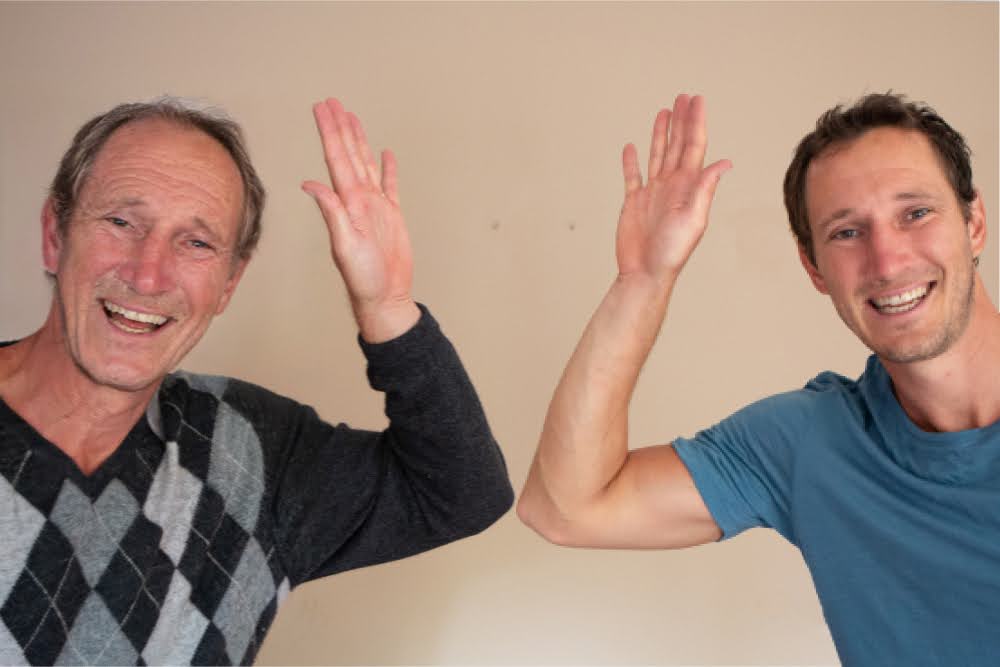 Which type of person do you want to be?

I’ll take B in all examples (but with the odd scoop of ice cream).

And I can not-so-humbly say that’s who I’ve become. I’m happily pretired and living off my investments.1Though income from The Unconventional Route is catching up fast. I feel glorious for having just completed a 5-day fast and swam in the ocean every day in November here in Vancouver, Canada. And I’m so productive friends and family approach me asking them to coach them.2Get a free intro by reading about my lifelogging practice and time log example.

Thanks to one thing more than anything else:

A strong relationship with my future self.

You can do it, too.3Well, maybe not if you’re an incurable jerk or too closed-minded to try something that at first-glance seems like woo-woo self-help mumbo-jumbo, but is backed by solid science. Because it’s no different than maintaining a solid relationship with a spouse, friend, or child. All you have to do is stop selfishly favoring your current self to the detriment of your future self.

Here are the counterintuitive but science-backed strategies to make it happen.

In This Guide to Befriending Your Future Self

We all are inherently selfish because, as psychologist Elizabeth Dunn puts it, “The present acts as a magnifying glass for our emotions.” And we stare through those darn things as intently as Sherlock Holmes finding a fingerprint.

It’s hard not to. Especially, we do this because the present’s hard to miss and we suck at visualizing the future.

You’re Imagining the Future From the Wrong Angle

Try this quick exercise to test if you and your future self are working together:

Imagine you’re like Ebenezer Scrooge from A Christmas Carol. The Ghost of Christmas Yet to Come transports you to a family dinner 20 years from now that Future You is hosting. Close your eyes and picture the scene. Don’t be lazy. Do it for three seconds.

What do you see?

I bet you my magnifying glass that you were watching your future self eat and chat, kind of like in a Sims video game.

If so, you failed the test.

Because when you watch your future self from the outside, your thoughts go through the part of your brain that registers Future You as a different person.4Medial Prefrontal Cortex Predicts Intertemporal Choice, Jason P. Mitchell, Jessica Schirmer, Daniel L. Ames, and Daniel T. Gilbert A stranger.5Future self-continuity: how conceptions of the future self transform intertemporal choice, Hal Hershfield

You sometimes don’t even smile at strangers, let alone make sacrifices for them.

How much do you think your beliefs, preferences, priorities, and values will change over the next decade?

Most of us think we’re close to finished products, so we won’t change much (6 or 7 in the diagram below).

Others, the dreamers among us, naively believe we’ll get our act together or that some Fairy Godmother or Morpheus will come along to transform us into nearly unrecognizable upgraded versions of ourselves (1 or 2 in the diagram).

The reality that few of us dream of, but we should for our own well-being,6The more people predicted they’d stay the same, the more satisfied they were with their lives 10 years later according to Identity Over Time: Perceived Similarity Between Selves Predicts Well-Being 10 Years Later, by Joseph S. Reiff, Hal E. Hershfield, and Jordi Quoidbach is somewhere in between (3, 4, or 5).

Think of how much you’ve changed in the past ten years. Realistically, that’s about how much you can expect to change in the next ten.

Or maybe you can make your fairy tale come true and achieve level 1 or 2. That depends on if you can learn to treat your future self better.

Let’s look at how to do that now.

How to Be a Better Friend to Your Future Self

Get Intimate With the Future You

Try the Scrooge exercise from before, but this time imagine it from the eyes of Future You, not Current You. Then pump up the empathy by adding in detail:

Adding vividness to your future self visualizations will make you more willing to sacrifice the present for future gains.7Future self-continuity: how conceptions of the future self transform intertemporal choice, Hal E. Hershfield And the more you do it, the more real your future self becomes in your mind, and the more likely you will act in its interest.8Future Work Selves: How Salient Hoped-For Identities Motivate Proactive Career Behaviors, Strauss, K., Griffin, M. A., & Parker, S. K.

To take it to a creepy but fun level, use a free app to create a realistic photo of your older self, print it off, and put it on your fridge beside the photo of the kid in Africa you send to school. It works.9You Make Better Decisions If You “See” Your Senior Self, Hal Hershfield, HBR

Do you remember back in the 90s when everyone wore WWJD bracelets? (WWJD = What would Jesus do?)

It was all the rage among the cool kids at my elementary school in Vancouver. Even Rahim, my Hindu classmate, wore one.

Well, it’s time to bring those bracelets back with a secular twist. Instead of WWJD, put WWFMD on them:

What would future me desire?10You don’t actually need a bracelet. You can tattoo it on both your arms if you prefer.

When you’re faced with a decision that affects Current You and Future You, remember to ask, WWFMD.

Future You is a wise mentor and coach. You’ll make better decisions when you ask for its input.

I’m not just pulling these claims out of the air, either. A future self focus has been found to make you healthier,11Future self-continuity is associated with improved health and increases exercise behavior, Journal of Experimental Psychology: Applied wealthier,12Saving for the future self: neural measures of future self-continuity predict temporal discounting, Ersner-Hershfield H, Wimmer GE, Knutson B. better behaved,13You Make Better Decisions If You “See” Your Senior Self, Hal Hershfield, Harvard Business Review more productive,14Pathways To Success Through Identity-based Motivation more patient,15Do Yourself a Favor: We Help Our Future Selves for the Same Reasons We Help Others (PDF), Harvard Library and have stronger career prospects.16Future Work Selves: How Salient Hoped-For Identities Motivate Proactive Career Behaviors, 2011, Journal of Applied Psychology

Do It For Them

When I previously wrote sacrifice the present for your future self, I really meant it.

Rather than treat your future self well out of self-interest, consider it your social responsibility. You’re acting selflessly on behalf of your future self and the people who depend upon the well-being of Future You.

This social responsibility framing is more motivational than a self-interested one.17You owe it to yourself: Boosting retirement saving with a responsibility-based appeal, Christopher J. Bryan and Hal E. Hershfield And it’s straightforward. You have friends and family members who love you because you’re a caring person. Just treat your future self the same way.

To get better acquainted with your future self, open up a line of written communication between the two of you.

I fell into doing so indirectly with my lifelogging practice. Other people claim it helps to write actual letters.18How My Life Changed After 30 Days of ‘Future-Self’ Journaling, by Sarah Aboulhosn on Medium19Why you should write a letter to your future self, by Kathleen Davis on Fast Company [UPDATE: I got back on the bandwagon writing writing letters to my future self, too.]

If you choose the latter, try writing from Future You to Current You. It’ll put you more in the WWFMD mindset and bring you closer to your future self.20Conversation with a future self: A letter-exchange exercise enhances student self-continuity, career planning, and academic thinking, Yuta Chishima & Anne E. Wilson, Self and Identity Write what Future You is up to, what they’ve accomplished, and the steps they took to get there.

Also write about the things Current You has that Future You might not—e.g., the freedom of youth, full health, healthy parents, fewer responsibilities, time—to feel more grateful for today.

When All Else Fails, Stick It to Your Future Self

Maybe you think these future self befriending tips are nonsense and you’re mad at your three-minute-ago self for wasting your time to read them. Or maybe you’re too lazy or selfish to try any of it.

Fine. Sorry I couldn’t convince you.

At the very least, I hope you agree with me that you could be wealthier, healthier, and happier overall by being less selfish. If so, consider this:

Here are some ways to do so:21For related ideas, listen to The Real Reason You Procrastinate episode from Adam Grant’s podcast, WorkLife.

From Enemy, to Friend, to Happiness

When a thousand people were asked, “Who is your worst enemy is in the world?” guess what the most common answer was?

Themselves. Half of the respondents said they were their own worst enemy.

So we know we’re selfish. We just don’t do anything about it and suffer the consequences. But it’s not hopeless, not even that hard, and the rewards are huge.

“The three components of happiness,” according to author and psychiatrist Gordon Livingston,22I found this quote in 5 Crucial Questions To Get What You Really Want, by Benjamin Hardy, a fellow future self philosophy fanatic. “are something to do, someone to love, and something to look forward to.”

Befriending your future self scores you the trifecta:

If that doesn’t convince you to be less selfish and ask WWFMD more often, I give up. My future self is telling me I have better things to do.

Get Some Future Self Relationship Therapy

A dramatization of how I learned to improve my relationship with my future self.

More About Your Future Self

My Personal Strategic Plan Inspired By a Harvard Business Legend