Home > Health and Fitness > How Many Bugs Do We Eat a Year? The True Answer

One To Two Pounds!?

If you google, “How many bugs do we eat a year?” you’ll find reputed sources like the New York Times, Scientific American, and the Wall Street Journal report the answer is one to two pounds for the average American.

How can this be?

But one to two pounds is a lot. Could it possibly be true?

None of the reports reference how the one to two pounds was calculated. So we decided to do the legwork ourselves.

How Much FOOD Do We Eat a Year?

Before answering “How many bugs do we eat a year?”, let’s first look at how much food an average American eats overall.

According to the USDA it’s close to 2,000 pounds. Here’s the disturbing breakdown:

Yikes. Instead of worrying about how many bugs we eat a year, we should probably focus on the unhealthy junk we consume.

But that’s not as interesting. So let’s continue.

Assuming—Hoping!—meat, fats, and dairy are bug-free (except this cheese!), of the 2,000 pounds the average American eats each year we’re left with 905 pounds of food in which our involuntary insect snacks can hide: 689 pounds of fruits and veggies,192 pounds of flour, and 24 pounds of coffee, cocoa, and nuts.

Could it be that there are one to two pounds of bugs hiding among it?

By breaking down the 905 potentially bug-infested pounds of food we eat per year by food type, multiplying each by the FDA’s maximum allowances for insects in those foods, and making some simplifying assumptions (see note below), we can calculate an absolute worst-case scenario to answer our question of, “How many bugs do we eat a year?”

Here’s the chart with the calculations:

It seems like all the reports saying we eat one to two pounds of bugs a year are grossly overstated.

…the insects we eat in our sleep?

Even if you live in your attic you’re not eating any bugs in your sleep. A bug crawling into your mouth is like you sticking your head in a lion’s mouth. It happens, but only to bugs (or people) with a death wish.

According to Rod Crawford from the University of Washington’s Burke Museum, “For a sleeping person to swallow even one live spider would involve so many highly unlikely circumstances that for practical purposes we can rule out the possibility. No such case is on formal record anywhere in scientific or medical literature.”

…the beetles used for the red dye Starbucks put in its smoothies?

Carmine, a natural red dye derived from the cochineal beetle, is no longer used by major companies like Starbucks after the uproar about it in 2012.

But you might still be consuming it in your cookies, yogurt, and artificial crab meats. Nevertheless, carmine is so potent it is only used in minuscule amounts, so it doesn’t affect our totals.

…if you only ate oregano for a whole year?

But if somehow you became herbivorous and managed to survive you would actually eat over two pounds of bugs in a year. Way over.

Oregano has the highest allowance of bug parts of any food listed in the FDA guidelines:1,250 bug parts per 10 gram sample. So if you ate 2,000 pounds of oregano you could be getting as many as 50 pounds of bugs along with it!

If Americans Only Ate Oregano:

…little mealworms and fruit flies that get into my food after I bring it home.

Enough questions! Unless the amount of bugs in your food increased by a factor of ten when you take it home, you’re still not eating one to two pounds of bugs a year.

But Wait! There’s a Twist!

You should WANT TO eat more bugs every year.

You might also consider eating insects intentionally. There is a growing bug food industry that is eager to show you that insects can be scrumptious super nutritious and sustainable food.

Stop worrying about “How many bugs do we eat a year?” Instead, look at the bigger picture. Worry about what you’re eating in general. (And maybe sometimes don’t eat anything at all.)

It’s free, fun, and unpredictable, just like life should be. Hop aboard!

For simplicity we made the following assumptions, which produce a “worst-case scenario” answer to the question of how many insects do we eat a year:

How to Be More Open-Minded: 9 Quick Exercises to Try Today

How to Acquire a Taste: My Black Licorice Experiment

New Things to Try: 15 Ideas to Freshen Up Your Life

How to Stop Liking Junk Food: The Reverse-to-Revulsion Technique 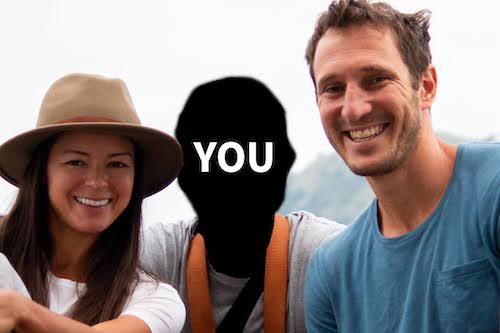 We all want awesome lives.

But the forces of complacency, conformity, and couch gravity are strong.

To fight them, join us to explore a spicy, new, unconventional idea every 10 days or so.