Self-justification is your ego shielding your identity from reality like an overprotective mother coddling her delicate child.

And it messes with your reality. As Carol Tavris and Elliott Aronson reveal in one of my favorite mind-changing books, Mistakes Were Made, But Not By Me, self-justification:

What makes self-justification especially insidious is this:

The less you believe you’re affected by self-justification, the worse you suffer from it.

So the first step to fighting self-justification?

Accept that you do it all the time.

That starts with understanding exactly how you self-justify. This post’s step-by-step explanation and multiple examples will help you do so.

Then, maybe—hopefully—you can catch your ego in the act and stop it before it makes your identity even softer and more deluded than it already is.

In This Guide to Self-Justification

You just finished watching the latest Fast and the Furious sequel at the theatre and get into your car to drive home. Since you, like most people, think you’re an above-average driver, you think to yourself, “I could have been a stunt driver in another life.” You sit down, put on your podcast, start your engine, pull out of your parking spot, and…

You sideswipe a pole, leaving a nasty gash on the passenger side of your car.

And that’s self-justification’s cue to get rolling.

Upon scratching your car, you feel an immediate sense of disbelief and uncertainty. This is called cognitive dissonance.

Tavris and Aronson define cognitive dissonance as “a state of tension that occurs whenever a person holds two cognitions (ideas, attitudes, beliefs, opinions) that are psychologically inconsistent.”

In the case of your self-inflicted sideswipe, your two inconsistent cognitions are:

The uncertainty of its situation makes your delicate identity tremble. It needs the reassurance of a clear and simple reality, not this complex dilemma.

Something has to be done to resolve it.

Ego comes to the rescue with lies and excuses.

In a flash, your ego, like an overprotective mom, jumps in to soothe your identity and assess the damage.

It sees the two inconsistent cognitions causing discomfort to your precious identity. Then it deftly whips out its favorite band-aids to salve the discomfort:

“Don’t worry, my precious little identity. It wasn’t your fault.”

Your precious little identity takes great comfort in the bosom of this BS. But it remains shaken from the experience.

Since your identity continues to tremble from the unfortunate sequence of events, your ego goes the extra mile to comfort the poor thing.

To do so, it uses confirmation bias, “the tendency to search for, interpret, favor, and recall information in a way that confirms or supports one’s prior beliefs or values.”

These are your ego’s three go-to confirmation bias tactics:

Time passes, memories blur, and your wimpy runt of an identity completely forgets the lengths your ego went to to protect it.

In its place, your identity fully believes a fabricated version of events that conveniently lacks the slightest hint of dissonance.

So when your friend asks you a few months later if you’ve ever had any mishaps while driving, this is how you might respond:

“Only once. I was super hyped-up from watching Fast and the Furious and exhausted from a crazy week or work. Some jerk-off parked so close to me that I was pinned against a pole. Maybe the movie desensitized me to the cost of damaging my car or something, but rather than spend what would’ve taken half an hour to squeak out unscathed, I said, ‘screw it,’ and accepted the inevitable scratch on the side of my car. It barely cost anything to repair, anyway.”

On its own, one instance of self-justification is no big deal.

Every time self-justification happens, your ego gets stronger.

By shielding your identity, your ego validates its presence. What’s more, the hard work makes it bigger and stronger than before, and ever more vigilant and proactive against further danger.

And your identity gets feebler.

Like a timid weakling of a child who’s allergic to everything and not allowed outside to “roughhouse” with other kids, your identity gets increasingly soft, susceptible to injury, and disconnected from reality.

And the feebler your identity, the more it cowers behind your ego to protect it.

And so goes the self-justification vortex.

Our egos become overbearing behemoths, our identities become so fragile that the slightest scratch sends them into convulsions, and we descend further and further away from reality into a self-justified world of our own creation.

For anti-self-justification strategies, see the companion to this post: How to Stop Justifying Yourself and Start Living in Reality.

And to solidify your grasp of the four-step self-justification process, review the following examples.

Reality: Your husband tells you he forgot to buy you a birthday present.

Reality: Your husband tells you he forgot to buy you a birthday present.

Watch Self-Justification in Action on Netflix

In The Push, Derren Brown uses self-justification to lead ordinary people down a spiral of increasingly immoral and harmful actions until, ultimately, seeing if they will commit murder.

I really liked it. And it’s so shocking that many people don’t believe it’s real.

Reality: You spend more than you should on a car.

Reality: You’re served fried flying ants as an appetizer at a fancy restaurant and feel a bit nauseous when you eat one.

Reality: You just read a blog post telling you that you have an inflated ego, fragile identity, and skewed sense of reality because of self-justification.

Try some of the strategies in the companion to this post, How to Stop Justifying Yourself and Start Living in Reality.

I also highly recommend reading Mistakes Were Made, But Not By Me for an entertaining and eye-opening exploration of self-justification and how it affects all aspects of life.

Mistakes Were Made (But Not By Me): Why We Justify Foolish Beliefs, Bad Decisions and Hurtful Acts, by Carol Tavris and Elliott Aronson

Join the over 4,000 people who get a fun but practical idea like this one, but in condensed form, every fortnight, in my Consider This newsletter: 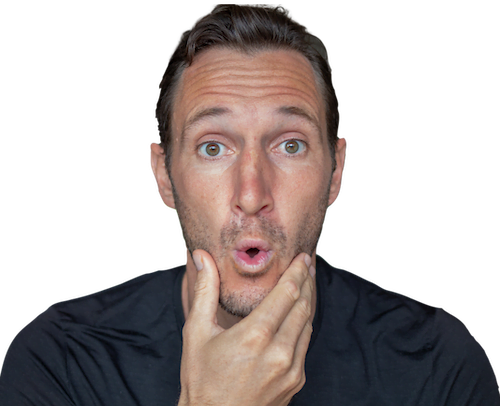