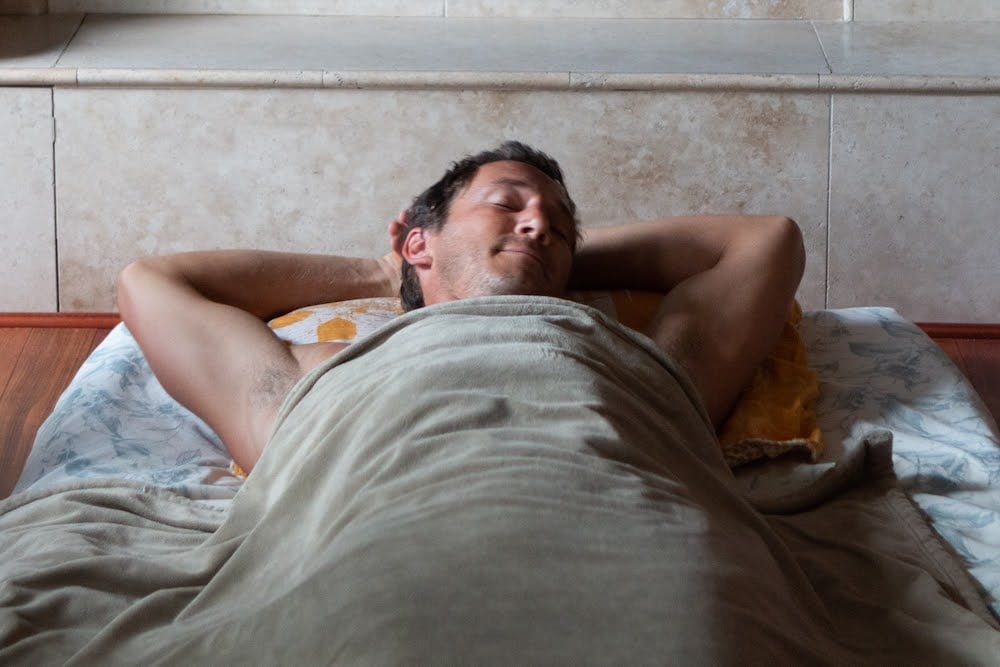 In this post: My (mis-)adventures with experimenting with sleeping on the floor, the four conclusions I came to, and a surprising two-years-later update.

I had no better alternative.

My foray into sleeping on the floor began out of necessity, not choice.

I was fed up with fending off my fiancée, now wife, Kim’s invasions over the invisible middle line of the tiny double bed in the apartment we’d moved into a month prior in Valencia, Spain. And I was sweating my huevos off.

According to my Oura ring, a finger FitBit for sleep, my average sleep scores dropped from 78 to 74. Not a huge difference but enough to make me feel worse than normal the next day.

But what could I do?

Buy a new bed? We only had two months left in Spain, so that didn’t make sense.

So that left only one alternative: Either Kim or I had to get off the bed to make things more comfortable for the other.

Guess who won that battle?

What does the science say?

Before migrating to the living room floor, I did some research.

Turns out science is sleeping on the topics of what sleep surfaces or positions are best:

Even the website Healthline, which tries to convince Google and readers that it’s smart by wantonly linking to as many studies as possible, resorts to mostly anecdotal evidence and speculation in its article on sleeping on the floor.

So without scientific guidance, I winged it.

I figured sleeping on the floor would be just like camping in my living room.

It’s more like barefoot running. Sure, it’s “natural,” but if you transition too hard, too fast, you’ll probably hurt yourself.

With just a yoga mat for padding on a laminate floor, my arms and legs fell asleep more than I did. And every night around 3 AM, my lower back woke me up screaming, “F you!” and didn’t stop until Kim emerged from her now spacious bed telling me it was time to get up.

Other bloggers’ posts on sleeping on the floor said it got better after about a week, so I powered through. No improvement.

Some said to try sleeping on your side or stomach. I tried that too. Even worse.

That’s what I get for believing blogs. (Consider yourself warned.)

I experienced a different type of back pain.

Oddly, as loud as my spine screamed at me during my fitful floor slumbers, the pain vanished within minutes of getting up. The rest of the day, my lower back actually felt better than ever.

One morning, it dawned on me:

Back pain from sleeping on the floor is different from the lower back pain I’m used to.

It’s not the same pain you get from too much slouching on a couch or from lifting heavy boxes the wrong way. It’s a duller version of what you get from doing back extensions. Exercise pain. Good pain.

My lazy little lower back muscles were complaining about having to get back to work after decades of slacking off on soft mattresses. Maybe I was pushing them too hard, but it was long overdue.

Another silver lining on my miserable yoga-mat-only misadventures of sleeping on the floor:

I felt extra open-minded and creative.

Challenging the convention of sleeping on a bed seemed to turn off complacent mode in my consciousness. Like fasting, traveling, and other new things to try I mess around with on this blog, it proved to be a way to “act your way to a new way of thinking.”

If only I could find a way to be less delirious and drowsy at the same time.

My average sleep score after 17 nights of sleeping on the floor?

Garbage. Way worse than the 74 I averaged sweating and struggling on the mini bed with Kim. A 67 sleep score is closer to what I’d get when I have to wake up at 5:30 AM to catch a flight after a night of drinking too much.

So I gave up on “pure” floor sleeping. I pulled out a thick blanket from the closet and folded it below my yoga mat as an extra layer of cushion between me and the hardwood.

My sleep scores jumped to the high 70s overnight.

Better than the bed! And my lower back and creativity continued to feel stronger than ever.

After a nightmarish first two-and-a-half weeks, I was becoming a sleeping on the floor believer.

Kim was becoming a believer in sleeping on the floor, too.

While she doesn’t have an Oura Ring to back it up, her sleep quality no doubt jumped once I left her free reign to roll about the bed. And better sleep puts her in a better mood, which is good news for me. (Another relationship hack?)

But there’s a drawback, too:

Oh well. Both Kim and I were okay with those sacrifices if it meant better sleep.

Based on others’ experiences I read online, I hoped sleeping on the floor would reduce the spasms and tightness in my traps that I’d started feeling not long after moving to Spain.

Once again, my experience was not as dreamy as my fellow bloggers said it’d be. Disappointing.

Excessive hunching over my computer to work on this blog was clearly the culprit. Roundabout treatments like sleeping on the floor (or stretching or acupuncture) wouldn’t cure my pain. I had to address the source of the issue. Maybe take more Alexander Technique classes? But that’s another blog post for another time.

Over the remaining month-and-a-half or so in Spain, my semi-softened floor sleeping continued to pay off.

I was particularly glad for it when a heatwave defeated our air conditioner. Being a foot-and-a-half lower down also lowered the temperature a precious few degrees.

And then we said hasta luego to Valencia.

Over the next nine months, Kim and I nomad-ed around Morocco, South Africa, then Canada. I slept wherever was most practical, which ended up being roughly half my nights on the floor and half on a bed.

This back-and-forth rounded out my perspective on sleeping on the floor versus on a big bed and led me to four conclusions:

Conclusion #1: You are what you sleep on.

I’ve become a firm believer that a harder bed makes you harder. And vice versa.

Mentally, it makes me feel more resilient and adaptable.

Every time I lay down on the floor, I can’t help but feel a bit like some unfazeable, Chuck Norris-esque ninja/monk. And I wake up more alert and ready to get off the floor and get going.

I feel more physically resilient and ready, too.

My lower back feels stronger, as I already mentioned. I also feel there may be some truth to floor-sleeping proponents’ claims that sleeping on a hard floor improves blood circulation and joint function.

Getting up and down from the floor and making my bed on my hands and knees forces me into positions I hadn’t regularly been in since daycare. If soft fatties with stiff joints did the same, I bet healthcare costs would drop.

I used to believe you should invest in the best mattress possible. You spend a third of your life there, after all.

Now, I believe that’s as misguided as the three-month salary “rule” for engagement rings. Like they do in the diamond industry, mattress industry marketers have manufactured mirages of value to suck big bucks out of us.

This six-minute video, while way over the top with its dramatization, might help put your doubts to rest:

Conclusion #3: How matters more than What.

What we sleep on doesn’t matter as much as we’re lead to believe.

Mattresses are to sleep what shoes are to running.

No fancy cushioning system is going to make you a superstar sleeper. If anything, these “advanced technologies” screw up our physiology in the long run. All we need is something reasonably flat and comfortable.

What’s more important is how you sleep.

A regular evening routine with less alcohol, snacks, screens, and artificial light will do way more good for your sleep than any mattress, or lack thereof. So too will sleeping in darker, quieter, and cooler rooms.

And if you’ve already heard all these “sleep tips” a million times but still not motivated to put them into practice, I strongly recommend Why We Sleep by Matthew Walker. It’s one of the “sledgehammer” books that changed my thinking because of all the eye-opening info it’s packed with about improving sleep.

Conclusion #4: Sleeping on the floor is the bitter Brussels sprouts of slumber.

Sleeping on the floor will never give you as much short-term comfort as the sweet ice cream of cushy modern beds, but it’s better for you overall. And you can learn to love it, especially if you do it right.

It’s now been two years since I first experimented with sleeping on the floor.

And I’m still at it.

Not only that, Kim joined me six months ago. We bought thin Japanese-style tatami mats and futons for our apartment in Vancouver. This arrangement gives us the best of both worlds: We can put our mattresses beside each other to cuddle, canoodle, and chat, but still enjoy our own space and the body and mind benefits of a low, hard surface to sleep on.

Kim’s experience as a floor sleeper has been so dare-I-say dreamy that she’s now talking about bringing our mats with us to South Africa when we return there in October.

Sleeping on the floor may be unconventional, but, more importantly, it’s practical. But don’t take some bozo blogger’s word for it. Try it for yourself.

Since publishing my story, I’ve received many questions from readers and continued to research and tinker with “best practices.” See my Floor Sleeping FAQ: Pillows, Positioning, Pain, and More the best answers I’ve been able to uncover.

And if you’re more of a visual learner, you may appreciate the video reenactment of this post:

Why You Should Ditch the Gym to Work Out Outside

Find Your Fitness Lifestyle With a Healthy Workout-Life Balance

24 thoughts on “Sleeping on the Floor: The Lessons I Learned the Hard Way”

Instead of making resolutions or goals, make a "life workout plan."