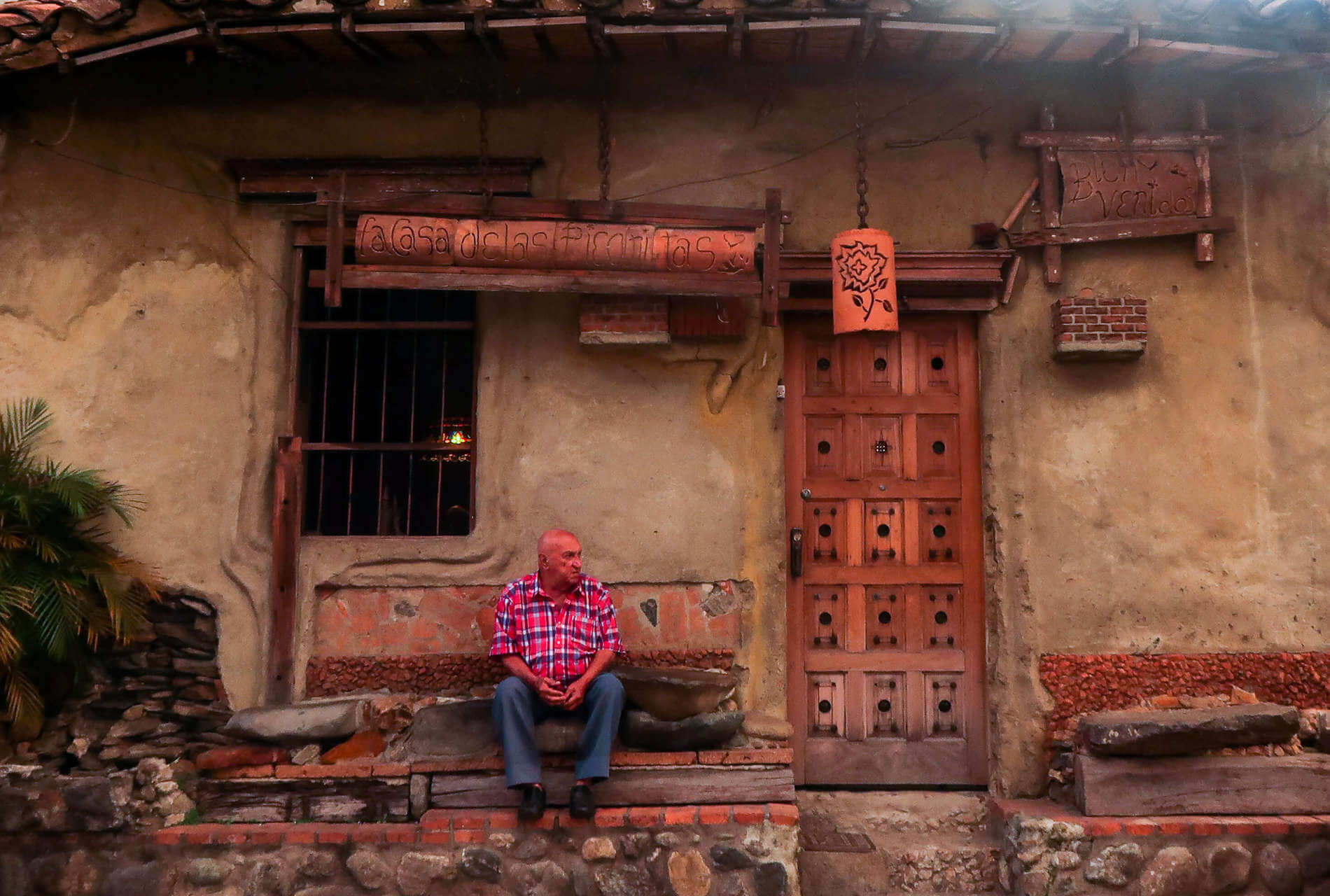 Envigado’s an awesome change of pace from Medellin, especially if you know what to look for. We loved living there, and hopefully this guide of  our favorite foods, sights, and things to do in Envigado will have you loving it too.

This post is part of Everything to Know Before Visiting Medellin, a collection of no-B.S., unique guides to how to have an unforgettable stay in Colombia.

We lived in Envigado for two months loved it.

Located right next to the high-flying, rapidly-modernizing El Poblado district of Medellin, Envigado remains a hard-working, urban, unpretentious town that’s yet to be swallowed up by globalism. It is to Medellin what Brooklyn is to Manhattan (or was before the hipsters invaded).

It still has a true neighborhood feel. Residents still say “buenos dias” and shop at the local butcher and market, kids play on the streets, and old-timers sit on street-side tables drinking coffee (or aguardiente) while playing cards.

Since you probably don’t have the two months we had to explore everything, we’ve put together this guide. It gives you a quick intro to the city and shares all of our favorite places to go, foods to eat, and things to do in Envigado.

Know Before You Go

Things to Do in Envigado

Know Before You Go

This map shows the location of all of the highlights we’ll cover below. Follow these instructions to save this map to Google Maps on your phone.

Literally, viga is Spanish for rafter, so Envigado means “raftered.” Don’t all you architects get too excited though; there’s nothing special about the rafters in Envigado.

Physically, Envigado is one of ten municipalities in the Aburra Valley Metropolitan Area. It’s bordered by Medellin’s El Poblado district to the north, Sabaneta to the south, the Medellin river and Itagui to the west, and the mountains, Caldas, and El Retiro to the east.

Demographically, it’s a city of about 200,000 people. It’s one of, if not the, wealthiest (or least-poor) municipalities in Colombia.

How to Get There

The center of Envigado is just over 5 km (3 mi) straight south from the center of El Poblado. Here are your options for getting there:

Tip: Don’t go to or from Envigado (or anywhere in Medellin, really) between around 4:30 and 7 p.m. The traffic is a disaster. Relax, have an empanada and beer, and wait it out.

The three most wander-full neighborhoods in Envigado are:

For tons more info about these neighborhoods, nine other favorites of ours in Medellin, and how to decide which will appeal most to you, check out our Medellin neighborhood guide.

The Envigado neighborhoods we just mentioned are just as safe, if not safer than any in Medellin.

Unlike elsewhere in Medellin, in these neighborhoods we never felt people were watching us, nobody approached us to offer cocaine (like in El Poblado especially), and it’s always bustling so you rarely find yourself wandering empty streets by yourself.

According to multiple amigos Envigadeños, it’s so safe because of the local mafia called La Oficina de Envigado. They’re kind of like the Yakuza in Japan. They pull the strings but keep a low profile. In Envigado any illegal activity—robbery, drug dealing, violence—must be okayed by La Oficina first… or else. And they mostly leave the public alone—especially the tourists—to avoid unnecessary heat.

Who knows how true this is. We felt it was in our best interest not to be nosy and ask around. We’re bloggers, not journalists after all. You’re probably best off doing likewise.

Lastly, and to be clear, just because we feel Envigado’s safe doesn’t mean you can feel free to walk around wearing Flavor Flav-like gold chains talking on two iPhone 10s at the same time. You’re still in Colombia. Be as discreet as you would anywhere else. That way you’ll be extra safe.

The Dark Side of Envigado

Here are some of Envigado’s not-so-good aspects:

Best Things to Do in Envigado

We don’t know about you, but we like checking out what types of meats, fruits, veggies, bread, and pastries are, and how their prices compare to back home. Envigado is a great place to do so. Start off at Envigado’s main produce market, which is a mini version of Medellin’s Mercado Minorista, then wander up and down and in and out of the neighboring butchers and pastry shops.

If you’re looking to actually buy produce, go across the street to marvel at the low produce prices and the staff who add up the bills in their heads instead of using a cash register.

✓ Head for the Hills

We’re not going to spoil this one for you. Just go there, knock on the door and be friendly, curious, and as generous with praise as the owners of this house are with their hospitality. It’s worth it.

If you don’t speak Spanish, go with someone who does.

✓ Work Out at La Cancha

Join (or watch) youth futbol teams playing on the turf soccer field and covered basketball court, tattooed (but very friendly) dudes pumping their muscles at the outdoor workout area, and bright-spandex-wearing people jogging around the track at this neighborhood public fitness facility.

Related: Why You Should Ditch the Gym to Work Out Outside

Casa Museo Otraparte is without a doubt our favorite spot to have a coffee or limonada de coco (see our post on Colombian drinks) and either do some work or hang out. It’s located in what was once the home of a famous local poet and philosopher named Fernando González. Now, his house is a museum and the gardens transformed into a cafe. The only problem with Otraparte is the internet is spotty and the coffee’s nothing fantastic.

For much better coffee and internet, but not the same garden atmosphere, go down the street a few blocks to Cocolatte by La Calle de la Buena Mesa.

Or, for horrible coffee and zero internet but great people watching, pull up a seat at one of the cafes on the main square.

✓ Have Some Christmastime Fun

In December, Envigado’s main square and streets are delightfully decorated with over-the-top Christmas decorations. And while the decorations get all the publicity, Kim and I enjoyed the nativity scenes—mini, but often intricate, models of Biblical times—the most. To find the best ones you’ll have to wander around the neighborhoods.

Also, grab a bite from the street vendors along Carrera 43 by the main square, which is closed to traffic and filled with vendors.

Go for a haircut and get in a spirited discussion/debate about religion and the distinction between a girlfriend and a wife like Chris did, play three-ball pool at one of the numerous pool halls, or say hi to the groups of bored men who sit around on the main square waiting for something interesting to happen and gossip about.

Do something out of the ordinary and you may get extraordinary results.

Envigado is not a party place, but for a chill evening there are good times to be had.

When Anthony Bourdain came to Envigado to film No Reservations, he made a mistake. He went to Brasarepa instead of La Gloria de Gloria or Trifasico. These two places serve bandejas with such big hunks of chicharron (a.k.a mega-bacon) that they deserve to be called legendary.

Fitting in with our New York comparisons, the three best pizza places we tried in Medellin are in Envigado (sorry, Cafe Zorba).

La Buena Mesa (The Good Table) is Envigado’s little dining district. It’s only a couple square blocks, so your best bet is to walk along, check the menus and pick what interests you most. A few worth considering are Chiclayo (Peruvian),  Zacatecas (Mexican – also a couple blocks away), Trifasico (as previously mentioned), and Antonio’s Gelato (for dessert). Lemoncillo, an authentic Vietnamese restaurant a few blocks down the street, is loved by seemingly everyone who goes there… except us. We didn’t get what the fuss was about.

The restaurants in El Dorado give the ones in La Buena Mesa a run for its money. Check out Pedacito de Amor (Steakhouse), Pizzeria Burro (previously mentioned), Ragazzi (pasta and craft beer), or La Burger Bar (burgers).

Offset all the fried meat you’ll find elsewhere by going for a healthy vegan lunch at one of our two favorite menu del dia lunch spots, Casa Antonio’s and Prana. Both serve creative, colorful, and cheap lunch menus of soup, a main course, a freshly pressed juice, and a small dessert.

Where to Stay in Envigado

There is probably no stronger piece of evidence we can give you to argue just how un-globalized Envigado is than this:

It’s called the Arame Hotel. We didn’t stay there nor do we know anyone who did, so we won’t pretend to know or try to sell it to you to get a commission for booking there. It has good reviews, but, as you can see on the map, the location’s not that convenient.

Other than the Arame, your options are to stay in El Poblado—or anywhere else in Medellin for that matter—or at an Airbnb, which is what we did.

Airbnb isn’t technically legal in Envigado but, like everywhere in the world, that doesn’t stop anyone. Check out what’s available here. And if you’ve never used Airbnb before, save yourself $45 or so while supporting our next trip at the same time by using our referral link here.

Where to Stay in Medellin:
Grading the 10 Best Neighborhoods

Everything You Need to Know for Visiting Medellin

The Best Restaurants in Medellin for 20 Unique Occasions

You’re guaranteed to find a new idea in this short email of my 21 favorite “unconventional” approaches to consider:

And the fresh approaches are in your inbox.

11 thoughts on “Envigado: Inside Guide to Medellin’s Most Authentic Neighborhood”