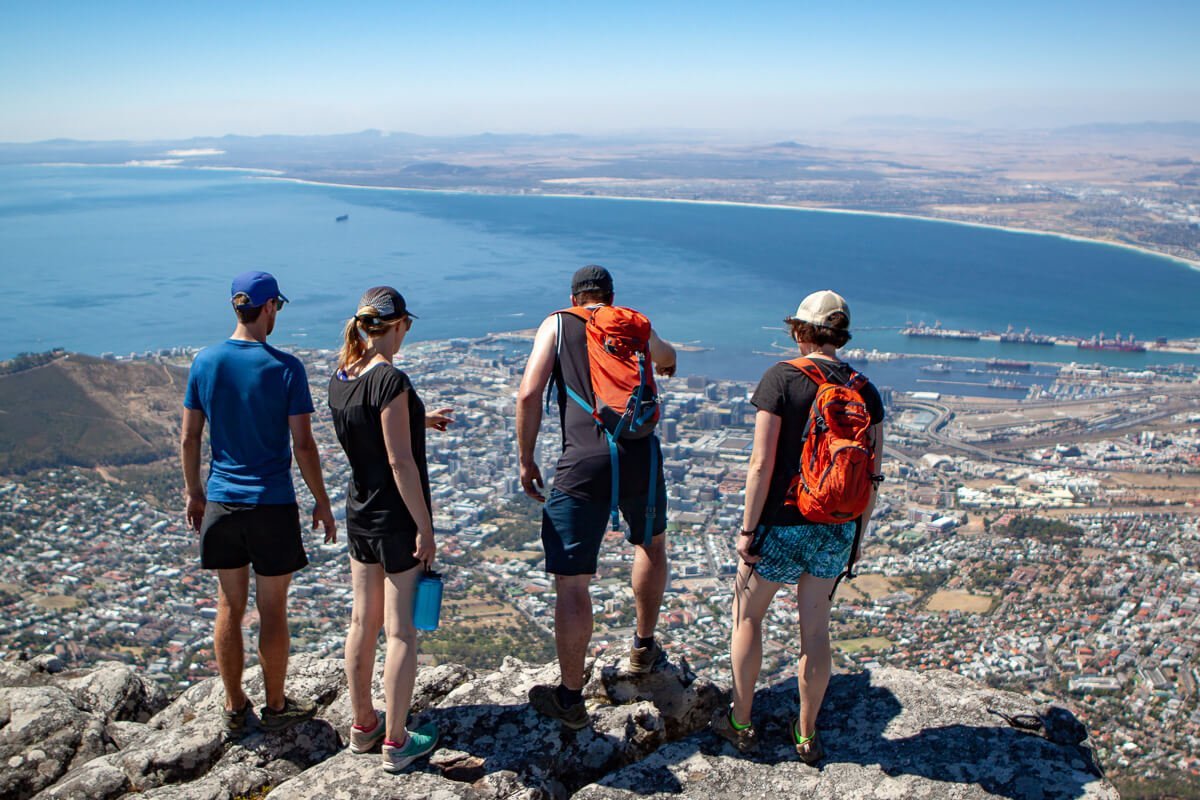 You Should Know This

Get the facts from our Cape Town destination guide, then continue on our Cape Town travel blog with unique restaurants, unconventional must-dos, the best neighborhoods, and dos and don’ts.

Whatever the case may be, we made this Cape Town destination guide to clear up some misperceptions and give first-time visitors a better understanding of what may be our favorite (but flawed) city in the world.

In This Cape Town Destination Guide:

Cape Town is one of South Africa’s three capital cities. It is the legislative capital, Pretoria is the administrative capital, and Bloemfontein is the judicial capital.

Just under 4 million people live in Cape Town, making it the second most populous city in South Africa after Johannesburg.

For instance, Cape Town’s largest and fastest-growing township, Khayelitsha, was only established in 1985 and now has a very-roughly estimated population of 2+ million.

Before the white Europeans and black Bantu Africans arrived, Cape Town was inhabited by native the Khoisan, who today would be considered “coloured.”

(“Coloured” is not considered derogatory in South Africa, by the way.)

The Khoisan were renowned for their hunting ability and knowledge of local plant life. Also, according to The Covenant, some Khoisan women had buttocks so large babies could sit on them.

5. Cape Town’s Plant Life Is More Diverse than the Amazon’s

The plant life around Cape Town is more botanically diverse than the Amazon.

Learn about it on a guided hike with our friend Justin or by visiting Kirstenbosch Gardens, or drink it and eat it with Veld & Sea.

6. Bo-Kaap’s Colored Houses Were Plain White Not Too Long Ago

The emblematic brightly-painted houses in Cape Town’s Bo-Kaap district were painted that way in 1994 by residents to celebrate their independence at the end of apartheid.

South Africa’s got 542 wineries and the vast majority are within an easy day-trip Cape Town. Close to 300 of them are less than an hour away.

To help you choose which to visit, we’ve given you our Top 10 Most Unique and Unforgettable Wine Tastings.

Whenever we’re in the city center or the V&A Waterfront and looking out to the sea with Table Mountain behind us, we can’t help but think we’re facing south. But it’s the opposite.

Millions of liters of fresh water flow from Table Mountain directly into the ocean every day along four underground rivers and up to thirty-six underground springs that have yet to be tapped into.

10. Cape Town’s Not As Far South As You Think

Cape Town is only as far south of the equator as L.A. and Marrakech are to the north of it, 34 degrees.

How likely is it that I’ll get robbed in Cape Town?

For our first few days, we were on edge, but eventually we relaxed as we realized it’s safer than we’d been warned.

We’ve had zero problems in six months and most of our lifelong Capetonian friends had never been robbed in their lives.

How to avoid getting robbed?

Be a bit more on guard than in Western Europe. Don’t walk on empty streets at night, don’t go hiking alone, don’t get wasted on Long Street, and don’t flaunt valuable cameras and phones outside of the safe bubbles of Gardens and the Atlantic Seaboard.

Even in the peak of summer, December and January, humidity is low and winds are often high, so you’ll rarely be baking hot and will often need a jacket.

In the winter months from June through August, well… take a look at this weather forecast screenshot I just pulled now at the beginning of July:

Did you look at the above weather forecast?

Cape Town has water. It rains quite a bit in the winter, though in the summer it can get so dry you might see wildfires.

The whole drought issue came about because the city doesn’t do the best job at managing its water supply (more on this in Fun Facts below) and faces the challenge of keeping up with out-of-control population growth (another Fun Fact coming up on this).

Don’t let any water concerns sway your decision to visit Cape Town. Just be a bit more water conscious in Cape Town than usual by taking shorter showers and not flushing your pee.

How scared should I be of lions?

…if you were to go hiking around Cape Town a few hundred years ago.

Now, lions and pretty much all wildlife has been wiped out in the parks around Cape Town. All you can expect to see are baboons (a big nuisance around urban areas), dassies (a.k.a. rock hyraxes), and, everyone’s favorite, penguins.

If you want to do a safari and can’t make it to Kruger or Namibia’s Etosha National Park, your nearest bet would be Aquila Game Reserve, two hours out of town.

How scared of sharks should I be when swimming at Cape Town’s beaches?

It depends on how much you look and smell like a seal, sharks’ favorite food.

At Cape Town’s Indian Ocean beaches like Muizenberg, the waters are warmer and more shark-friendly, but there are hundreds of surfers in seal-like wetsuits to attract the sharks away from you, there are shark spotters, and there are essentially never any shark attacks anyway.

The Atlantic Ocean beaches like Camps Bay and Clifton are shark-free. Your biggest deterrent to going swimming will be the freezing water temperatures.

Is Cape Town right on the southern tip of Africa?

Contrary to what many believe, Cape Point and the Cape of Good Hope aren’t as far south as you can go.

The real southernmost point of Africa is about 50km further south and a three-hour drive away from Cape Town at Cape Agulhas.

What else should I know before visiting Cape Town?

For tips on how to pay for stuff, how not to screw up your trip, and more, advance on to our Cape Town Travel Tips: 25 Dos and Dont’s to Know Before You Go.

Why is Cape Town so awesome?

Cape Town could very well be the most beautiful and well-rounded city in the world.

The beauty comes from being squished between the sheer cliffs of Table Mountain and the turquoise, soft sand beaches of the Atlantic and Indian Ocean.

The well-roundedness comes from its proximity to everything you could ever want to do:

A Perfect Day in Cape Town

For an idea of what makes the Mother City so amazing, watch the “perfect day in Cape Town” I planned for Kim’s birthday:

What Language Do Capetonians Speak?

Every Capetonian speaks English, but the majority of them have a different mother tongue.

Roughly 28% speaks it as their mother tongue.

Their accent is so soft and soothing that whenever I hear it I want to lie on a couch and tell that person about my Mommy issues.

Afrikaans is a creolized version of Dutch. About 36% of Capetonians speak it as their mother tongue.

Afrikaans speakers generally speak perfect English too, with a guttural and bubbly accent that’s sometimes mixed with so much Afrikaans slang that it’s hard to understand.

Xhosa (roughly pronounced Koh-sah), is the mother tongue of about 30% of Capetonians.

Keep an ear out for its famous clicks.

Their English accent is soft and regal. You’ve probably heard it before in videos of Nelson Mandela. (Morgan Freeman’s attempt to mimic it in Invictus doesn’t count.)

How expensive Is Cape Town?

Restaurants, wine, accommodation, and tours all roughly cost the same as less-touristy parts of Europe and definitely less than Canada or the US.

That’s why we, as barely-paid bloggers who make pennies on these crappy ads you see on our page, love it. In Cape Town we can live as if we have real jobs.

So if you have a real job in an expensive part of the world, you’ll really live like a king down here.

What’s the best way to get around Cape Town?

Walk wherever you want around the City Bowl (the downtown part) and along the Atlantic Seaboard during the day.

And only rent and drive your own car if and when you go further out of town. Uber’s too cheap to deal with the hassle (and risk of broken windows) of parking.

Where’s the best place to stay in Cape Town?

Generally, we recommend people stay around the De Waterkant neighborhood. It’s central, secure, full of character, and has plenty of good food and drink options.

If you want to put a bit (or a lot) more thinking into finding the right place to stay in Cape Town for your specific needs, refer to our Where to Stay in Cape Town Guide. In it, we rate the best neighborhoods in the Cape Town across all the important criteria like safety, location, and dining. That way, you can find the spot that rates highest for what you care most about.

What are must-dos for everyone who visits Cape Town?

This 5 things are true musts for all visitors to Cape Town:

Whether it be from Table Mountain, Lion’s Head, a cable car, or a helicopter, you have to get high to get high on the views.

To use a favorite word among Capetonians, Cape Town’s beaches are “stunning.” And the people sunning themselves on those beaches can be quite stunning too. So is the cold water, in a body-numbing kind of way.

Even if you don’t drink wine, the opulence, class, and gardens of these places will leave you tipsy. These are our 10 favorite wine farms (…so far).

Cape Town’s weekend markets are where the who’s-who stops by for rooibos lattes, G&Ts, and to fill their wicker baskets with artisanal foods.

Driving along Cape Town’s highways is the only way to truly appreciate the setting.

On top of these five must-dos for everyone, there a many more that are must-dos for specific types of travelers and dates of the year. See them all in our blog post on Cape Town’s best things to do.

What local foods should I not miss out on trying when visiting Cape Town?


A lot of meat because the steaks and game meat (kudu, warthog, springbok) are world-class.

Some Cape Malay cuisine if you want to try some traditional cuisine. (Or if you’re vegetarian.)

And eat a Gatsby, a Cape Town-original, if you’re hung over.

For more specific food recommendations, see what’s on the menu on our picks for Cape Town’s Best Restaurants for 25 Different Occasions.

What should visitors drink to go with all that food?

Wine. You’ll realize that South Africa’s wine gets a bad rap internationally because South Africans drink the good stuff and only export what they don’t want.

Gin and tonics. They’re all the rage here now, especially with craft gins infused with they local fynbos (feign-boss) botanicals. 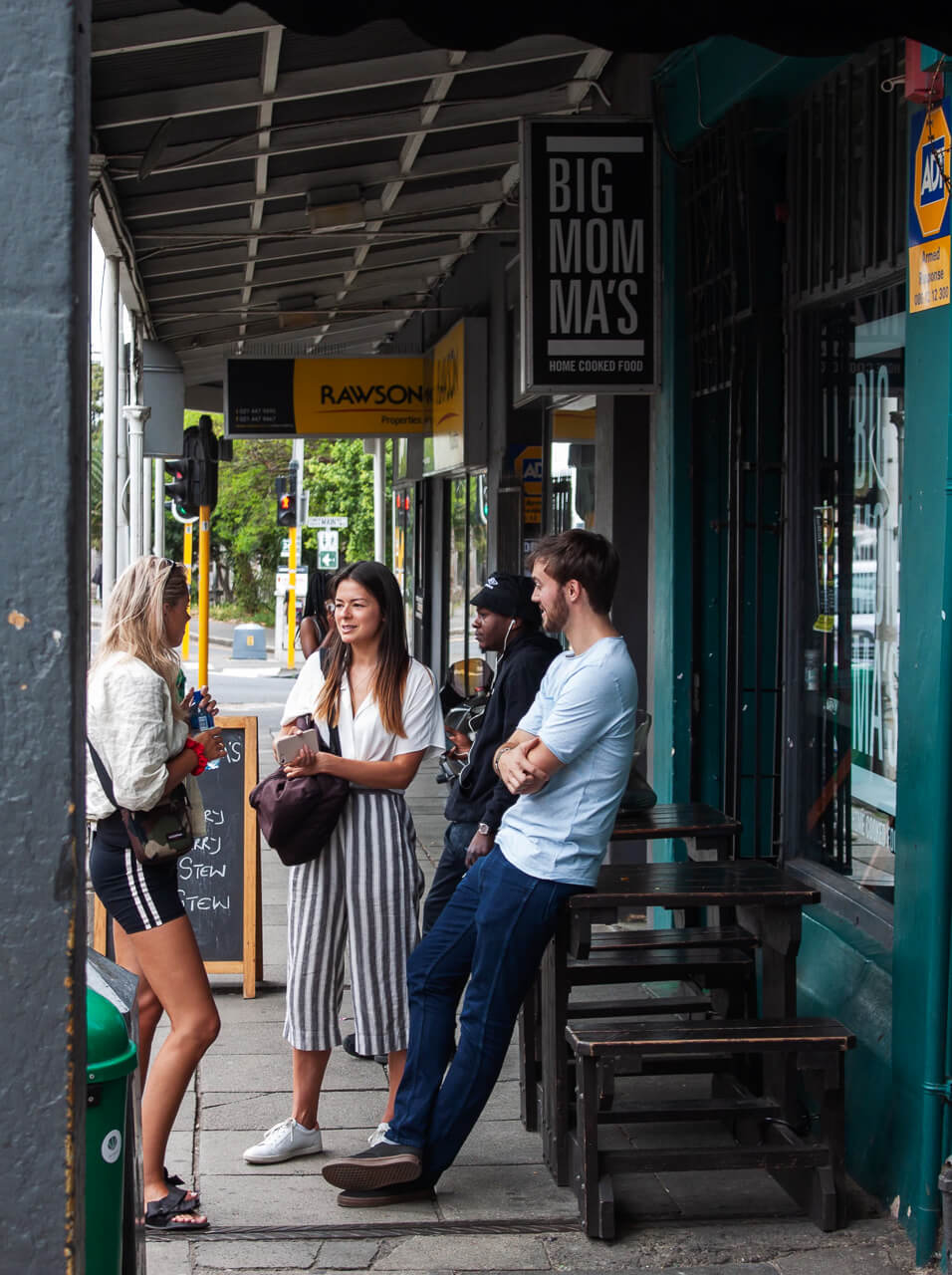 How should I dress when visiting Cape Town?

Cape Town’s got a relaxed fashion sense, so you can wear whatever’s comfortable for you and not stand out.

Just don’t go anywhere without a jacket and be careful with flowy dresses (or kilts) because the wind is enough to make trees grow sideways here and you can famously experience four seasons in one day in Cape Town.

Cape Town Travel Blog: How to Have an Unforgettable and Unique Trip

Cape Town Must-Dos: 5 True Musts and a Bunch of Maybes

Where to Stay in Cape Town: Ratings of the 7 Best Neighborhoods