Read our honest review of the Cape Town ENTERTAINER app, then continue on our Cape Town blog with unique restaurants, unconventional must-dos, and unforgettable wine tastings.

You’re Not Going to Believe Us…

You’re going to have a hard time believing Kim and my review the ENTERTAINER, a 2-for-1 deals app for Cape Town.

You’ll probably wonder, “How much did these bloggers get paid? What’s in it for them? What’s the catch?” At least that’s what I’d wonder if I were you.

All I can say is that we promise we’re not exaggerating, that we’re trying to be as honest as possible…

…and that the Cape Town Entertainer app is a freaking awesome deal.

What Is the Cape Town Entertainer App?

Why? To go out more and spend less doing so.

Where? Deals all over Cape Town and the Cape Winelands

When? New deals every calendar year. You can use them any time except for a few days (see below).

How Much? The price frequently changes. Currently, the ENTERTAINER costs R445 for 2020. Whatever the price is, get 10% off with the special promo code they gave us: UNCONVENTIONAL2020.

How Much Can You Save?

It’s true we went out more than usual to celebrate our glorious return to glorious Cape Town. But when we were here last, from January to April, we used the app about 30 times for R4,000 in savings.

Our 5 Favorite Entertainer Restaurants and Deals

Find even more of our favorite Entertainer restaurant deals in our Cape Town restaurants guide and save the locations of our top only-in-Cape Town food with our free Google Maps treasure map.

Follow up 2-for-1 wine tastings at South Africa’s oldest wine estate with 2-for-1 meals at their highly-regarded restaurant, Jonkerhuis.

Located in an unmarked house on High-Level Road in Green Point the 2-for-1 manicures and massages at this spa are a remarkable deal.

This restaurant in De Waterkant’s Cape Quarter Mall doesn’t look like much, but we haven’t eaten much better (and definitely not for a better deal) than their R90 Baked Parmigiana, which is only R45 with the coupon.

Share your favorite deals on the Cape Town Entertainer app in the comments. We’re eager for new places to check out.

Why NOT Get the Cape Town Entertainer App

If none of these apply to you, you should get the ENTERTAINER.

✗ You Can’t Afford It

The best way to save money is not to use the ENTERTAINER at all.

Eat at home and host dinner parties and blind taste tests rather than go out, work out outside rather than at the gym, and give each other massages instead of going to the spa.

Buy the ENTERTAINER as gifts for your employees and your butler and keep dining at Test Kitchen, which isn’t on the app.

✗ You Don’t Have a Smart Phone with Internet Connection

You need both to use the app… unless you can get away with bringing your laptop to a restaurant and connecting to their WiFi.

✗ You Don’t Have a Partner or Friends

One person isn’t allowed to use the buy one, get one free coupons for themself so, if you can’t find people to join you, you shouldn’t get the ENTERTAINER.

Don’t get the Cape Town Entertainer app if you’re only in town for a week or less.

Splurge, don’t save. You already spent tons of money and time to get here, so make the most of it by prioritizing Cape Town’s best food and things to do over the ones that are on the app.

What to Watch Out For

Your grandmother could figure out how to use the ENTERTAINER app, but there are a couple of things to watch out for:

You can’t use the ENTERTAINER on your own, in conjunction with other specials or promotions (or BYO), and you can use a maximum of four coupons for groups of eight or more.

You also can’t use it on the following days:

Mention it Up Front

To avoid costly misunderstandings, tell the person attending you that you will be using the ENTERTAINER as soon as you arrive and clarify with them exactly what is and is not covered by the promotion.

Calculate how much the bill would have been without the ENTERTAINER’s savings and tip on that. Common courtesy is to tip 10% on your bill in South Africa.

We battle with this addiction.

We’ve missed out on going to full-price places we would’ve preferred because we were sucked in by 2-for-1 savings at not-so-good spots with Entertainer deals. And we’ve used coupons because we had them, not because we wanted to.

Just like any addiction, the best way to deal with it is to begin by admitting you have a problem. Do that and you’ll be fine.

Don’t Try to Fool Your Date

You’re in trouble if you pretend you’re paying the full bill and your date finds out you used the ENTERTAINER.

Use the ENTERTAINER proudly. You don’t want to be with someone who doesn’t appreciate savings as much as you anyway, right?

How to Get Started for Free

Then, if you liked your free taste of 2-for-1 deals, take the plunge and buy the app. Use our promo code UNCONVENTIONAL2020 for 10% off.

Cape Town Travel Blog: How to Have an Unforgettable and Unique Trip 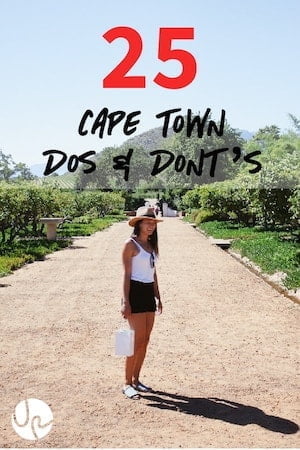