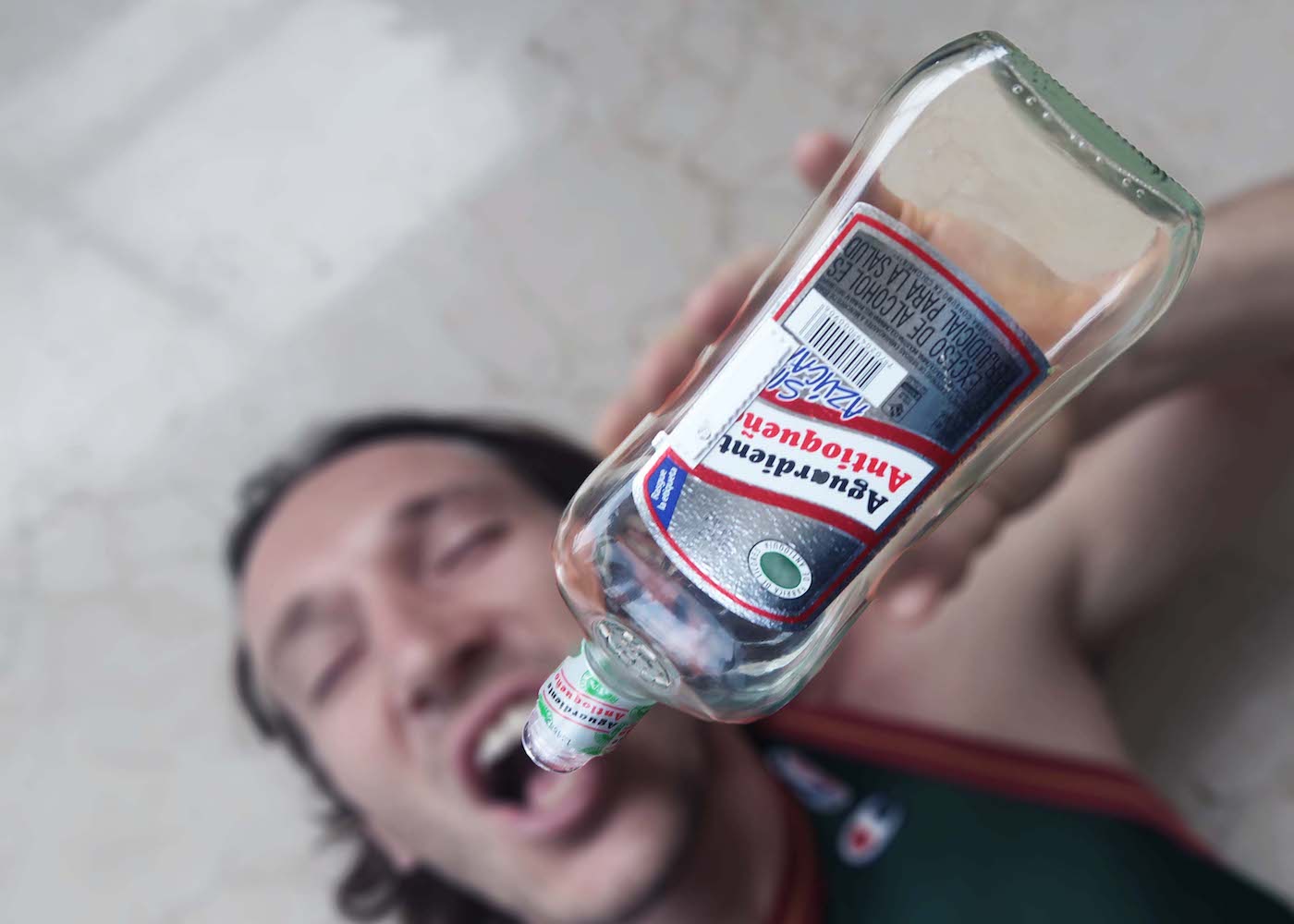 Despite being everywhere here in Colombia—on billboards, on tables of old men playing dominos, and in the hands of drunk tourists and locals alike—no one seems to know much about aguardiente, Colombia’s national drink.

We’re all too busy drinking it to care to ask.

But these nine facts about Colombian aguardiente are compelling enough to make you want to put your shot glass down for a second.

Next round’s on me if at least one doesn’t surprise you.

All the “sín azúcar” labelling is nothing more than a marketing gimmick.

That’s a whopping difference of 0.8 calories total in three shots worth of guaro.

The reality is Aguardiente Antioqueño’s normal “sugar-full” variety only has 1.6 calories of sugar per 100 mL. It’s basically sugar-free.

What does “aguardiente” mean?

A mash-up of the words agua, meaning water, and ardiente, meaning burning, aguardiente is direct translation of the English term, firewater (or vice-versa).

Colombian aguardiente also goes by, guaro .
Guaro is a derivation of the quechua word for sugar-water, warapu.

Warapu is also the origin of the name for sugar can juice in Colombia and many other Latin American countries, guarapo.

Why is aguardiente only 29% alcohol?

Twenty years ago, most Colombian aguardiente was 40% alcohol. Now most is only 29%.

There is suspiciously little information.

Aguardiente manufacturers say it’s to make it more appealing internationally. That’s hard to believe seeing as most every other liquor hovers around 40% alcohol.

Could it be perhaps that water is a cheaper ingredient than alcohol? Or maybe it’s somehow related to the fact that in Colombia the consumption tax on liquors with more than 35% alcohol was significantly higher than for those with less than 35% alcohol?

This last point was only rectified in 2017 after the EU filed a dispute to the WTO that these taxes were illegally discriminatory.

But Colombian aguardiente makers have still yet to rectify their watered-down manufacturing since then.

How popular is aguardiente in Colombia?

Popular, but less so every year.

Over the past 25 years, consumption of domestic liquors in Colombia has decreased by 56%. This is mostly attributed to increased competition from international spirits makers.

The year 2015 was particularly bad for some manufacturers such as Aguardiente Antioqueño, the country’s top producer, which saw sales drop by 33%.

Is drinking aguardiente good for you?

Each Colombian state (or department, as they’re called) has its own monopoly on liquor production and distribution. They rely heavily on profits from their booze business to finance public health care.

So when you cheers your shot of aguardiente and say “Salud!” (which means “health” in Spanish), you’re actually meaning it!

Why are the aguardiente brands different depending on where I go in Colombia?

Because every Colombian state has its own monopoly on liquor production and distribution, it can be nearly impossible to find aguardiente brands from other parts of the country than the one you are in.

In fact, if you bring a bottle of Nectar aguardiente from Bogotá to Medellín you risk in being confiscated from you for being contraband.

This variety across departments is decreasing, however. Due to declines in sales, only six of the nineteen original state-run liquor manufacturers remain, so there is more cross-state-border trade than ever.

What is aguardiente made of?

Colombian aguardiente is made from just four ingredients: alcohol, sugar, anise, and water.

Only one of those ingredients, water, comes from Colombia.

The pure alcohol is imported from Ecuador and Bolivia, sugar from Central America, and the natural anise flavoring from Spain.

So yeah, it’s not really that Colombian.

It doesn’t have complex tastes or compounds that get better with age like other alcohols like rum and whiskey. This means that unless other ingredients are added, like saffron in aguardiente amarillo for example, all that separates one Colombian aguardiente from the other is how much sugar and anise is added.

That’s why there’s no such thing as an aguardiente connoisseur and most people around the world prefer to drink other alcohols.

Which is the best Colombian aguardiente?

To determine if any Colombian aguardiente is better than the others, we assembled seven different brands and did a blind taste test. We also threw in the French anise-flavored liquor, pastis, to see if our tasters could tell the difference.

Click here to see which was the best aguardiente.

You’re guaranteed to find a new idea in this short email of my 21 favorite “unconventional” approaches to consider:

And the fresh approaches are in your inbox.

56 thoughts on “Colombian Aguardiente: 9 Surprising Facts About this Infamous Liquor”