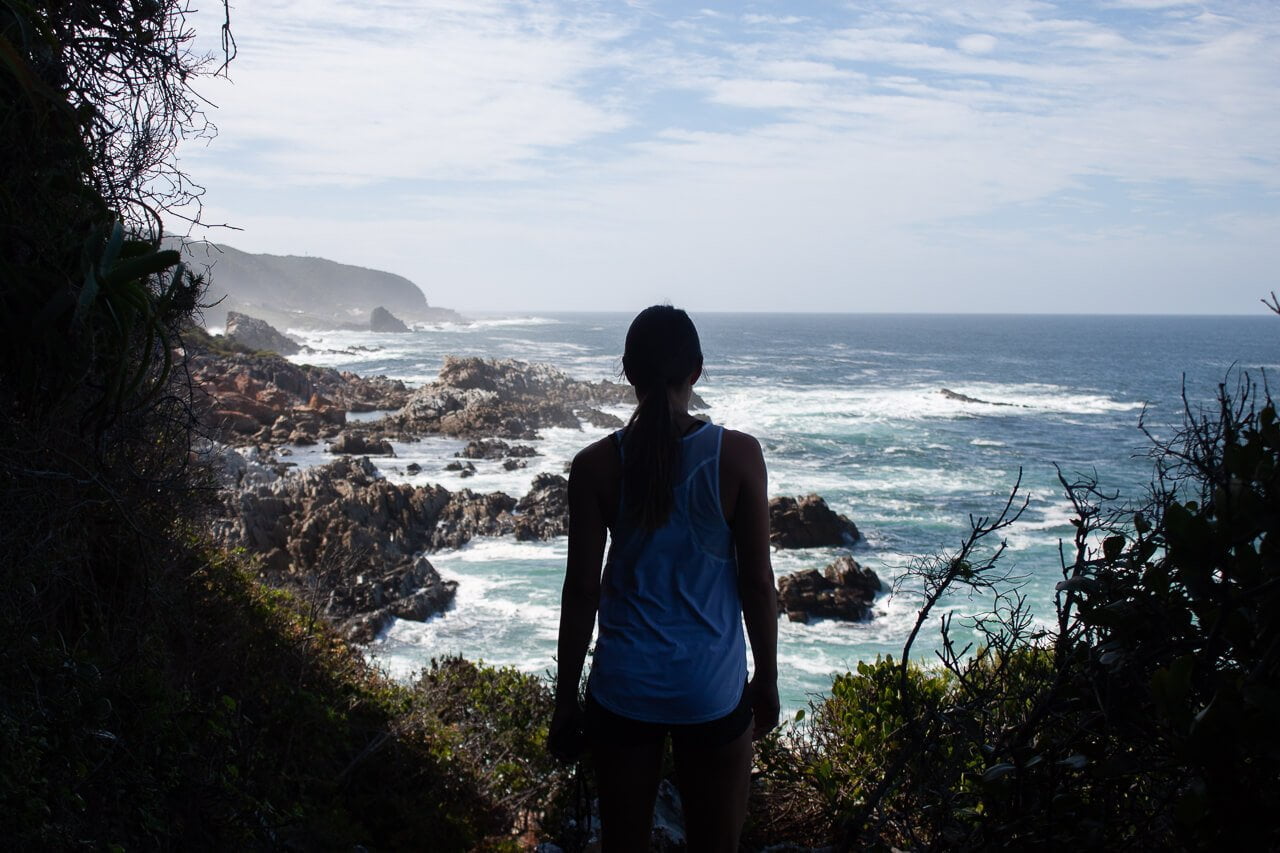 Plan the Garden Route Like You Plant a Garden

If you randomly toss a bunch of seeds around onto some dirt, your garden’s not going to turn out too well.

The same goes for your Garden Route trip. You have to put some thought into it for it to turn out beautifully.

These Garden Route travel tips will help you do so.

Pick a central place to stay instead.

The Garden Route’s small enough that from one central base you can be within no more than an hour-and-a-half drive from every attraction and activity. This saves you the hassle of packing and unpacking and saves you money, since most Garden Route hotels offer discounts on multi-night stays.

Plettenberg Bay and Knysna are the most central towns to use as bases. Or, if you’re doing a longer trip, pick two places to stay, like Storms River and Wilderness.

If you’re starting and ending your trip in Cape Town, don’t go up and down the N2, the Garden Route’s main drag, both ways.

Instead, go along the interior in one direction and hit up some non-Garden Route highlights like Matjiesfontein, the Meiringspoort Pass, and some Route 62 wine farms and restaurants.

This interior route only takes about and hour-and-a-half longer and allows you to discover a completely different, but equally worthy, section of South Africa.

✓ Rent your car from Around About

Our rental car experience was a disaster because didn’t follow our own advice from our South Africa road trip tips to rent from Around About Cars.

First, the company that offered us a free rental reneged on our day of departure.

We then booked the cheapest car we could find online from Europcar. But that fell apart when the sleazy agent Cobus at the Convention Centre tried to scam us into paying extra for insurance and refused to rent to us otherwise.

Our next stop was Avis, which was fine except that we ended up being penalized for exceeding the mileage limit.

From now on, we’re really truly sticking with Around About. We recommend you do the same if you’re doing a Garden Route road trip.

Every Around About rental comes with unlimited kilometers, each of our four other experiences with them was hassle-free, and they often have the cheapest rates.

(And Around About didn’t pay us to say this!)

How much mileage do you need?

We thought 1,600 km was plenty for our recent eight-day Garden Route road trip from Cape Town to Tsitsikamma and back.

We ended up driving more than 2,000 km. This caused us some stress during our trip and cost us about R1,000 extra.

So whatever company you rent from for your Garden Route road trip, get unlimited mileage.

There’s plenty of beautiful scenery on the Garden Route….

…You just can’t see most of it from the road.

The highway views along the Garden Route are mostly of clear-cut forests, suburban development, and farmland, not the beautiful beaches and majestic mountains we imagined.

Want the most scenic drives?

✓ Reserve at some restaurants in advance

One of the unexpected highlights of our Garden Route trip the food. Unexpected, but not accidental.

We ate through many megabytes looking up places to eat and chewed many friends’ and strangers’ ears for tips.

Then, when we settled on where to go, we called to reserve because, even though we were traveling in a slower season, tables were sometimes hard to come by. Some experiences, like lunch at Fynboshoek Cheese, on of our 8 favorite Garden Route restaurants, require reservations and don’t accept drop-ins at all.

Our plans got screwed up a couple of times because of incorrect opening hours reported on Google.

We eventually learned our lesson, stopped trusting Google, and started calling, or at least checking business’ Facebook pages, to confirm hours. We recommend you do the same.

✓ Plan around the days of the week

Beware that many restaurants and attractions are closed on Sundays and Mondays. Plan to spend those days of your Garden Route trip driving, having a beach day, or a doing a full-day outdoor activity.

On Fridays, look online or ask around for what events are going on in the evening. We missed out on a party at the new Knysna Gin Distillery because nobody told us this tip.

And on Saturdays, as we’ll elaborate on in a later Garden Route travel tip, head to one of the markets.

We enjoyed sampling snacks, checking out the crafts, and relaxing in the low-key local vibes of the Harkerville Saturday Market outside Plettenberg Bay.

And, while it’s not technically on the Garden Route, the Hermanus Country Market was similarly enjoyable.

Many told us the Wild Oats Market in Sedgefield is the best of the bunch, but the dates didn’t work out for us to check it out.

If we had planned better, we would have made the time to visit more than one estate in Plettenberg Bay’s emerging winelands by starting our Robberg Peninsula hike earlier.

The Plettenberg Einelands’ first vine was only planted in 2001, but now there are close to 20 farms making an increasingly varied (thanks to global warming) collection of wines.

Ask your hotel or Plettenberg Bay’s tourist office for a handy little booklet that lists the wine farms’ opening hours (many close annoyingly early at 4 p.m.) and contact info.

The Overberg region, which is between the Garden Route and Cape Town, has one as well.

✗ Don’t only “do the Garden Route”

You’ll have a fantastic time on the Garden Route, but you might have an even better time if you expand your options to less-publicized destinations.

All of the above are just as memorable and attractive as anywhere on the Garden Route.

Try our best travel tips and tricks (wherever you go)

You’re sure to find at least one idea that will change the way you travel in our list of our best travel tips and tricks. It has everything from advanced, experimental travel tips and tricks to practical but oft-overlooked ones to dumb advice we hear others give too often (and what to do instead).

Tips for Traveling on the Garden Route

✓ Get a jumpstart on the crowds

We got to Tsitsikamma Park just as the gates opened at 7 a.m. and had the Waterfall Trail to ourselves. By the time we got back to our car to walk to the suspension bridge at 10 a.m. the park’s trails teemed with tourists.

Plus, in the morning the light’s better for photos, the weather’s generally more favorable for speedy exercise, and it leaves you with more time for wine tasting in Plett, craft beer drinking in Tsitsikamma, or simply lying on the beach wherever.

Slow down, keep an eye out for interesting-looking spots and don’t be afraid to poke your head in and say, “Hi.”

That’s how we had some of our favorite experiences of our Garden Route road trip, like our unplanned but unforgettable meal at Tottie’s Farm Kitchen (see our Garden Route Restaurants post), and our encounter with an memorable character at the Op Die Plass “shop” by Storms River.

✓ Use Maps.Me for hiking

Maps.Me is a free Google Maps app alternative that may not be as practical as Google Maps for most purposes, but blows it out of the water for one:

We find Maps.Me to have most of the hiking trails Google Maps doesn’t and they’re easy to download and use offline.

For us, it particularly came in handy for getting back on track on the Robberg Peninsula after we misguidedly followed an equally misguided South African family the wrong way through a thick thicket.

How long do the hikes take?

We did most of the hikes in about 40% less time than estimated.

For example, it took us 2.5 hours to hike the Robberg Peninsula compared to the 4 hour estimate, and the Waterfall Trail in Tsitsikamma took us just under 2 hours versus the 3.5 hour estimate.

The Garden Route is spread-out enough that, despite being a top tourist destination, there are plenty of nooks and crannies that most visitors miss.

And don’t expect us bloggers and travel guide writers to be able to find and share them all.

Only the people who live there have the time to see and do everything, so ask them.

Some, like Colleen from Hide Away Guesthouse in Knysna and one delightfully opinionated Eden Adventures employee who spilled all her beans for us, will be treasure troves of tips.

Along the Garden Route, speed limits often change abruptly and traffic cops place their money-grabbing cameras right there to extract as much money as possible.

Count us among their many victims.

Even though our Capetonian friends warned us repeatedly about this and we were careful to comply with the speed limits, my attention slipped just once and I got dinged with a ticket because of it.

We all want awesome lives.

But the forces of complacency, conformity, and couch gravity are strong.

To fight them, join us to explore a spicy, new, unconventional idea every 10 days or so.