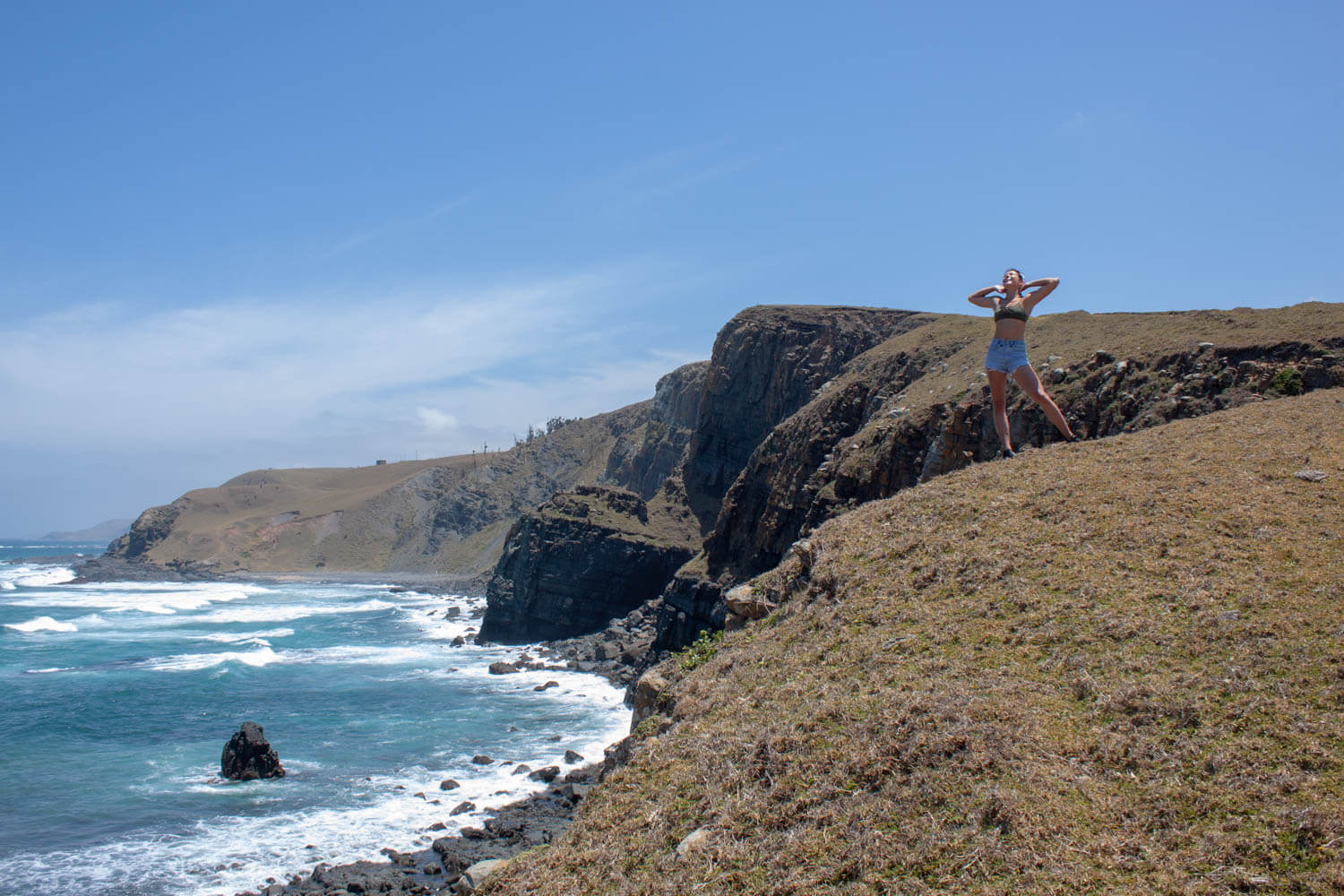 On Day 7 of the Hectic Route, our Johannesburg to Cape Town road trip, everything progresses nicely, but slowly, as we meander along the Wild Coast from Mdumbi to Coffee Bay. 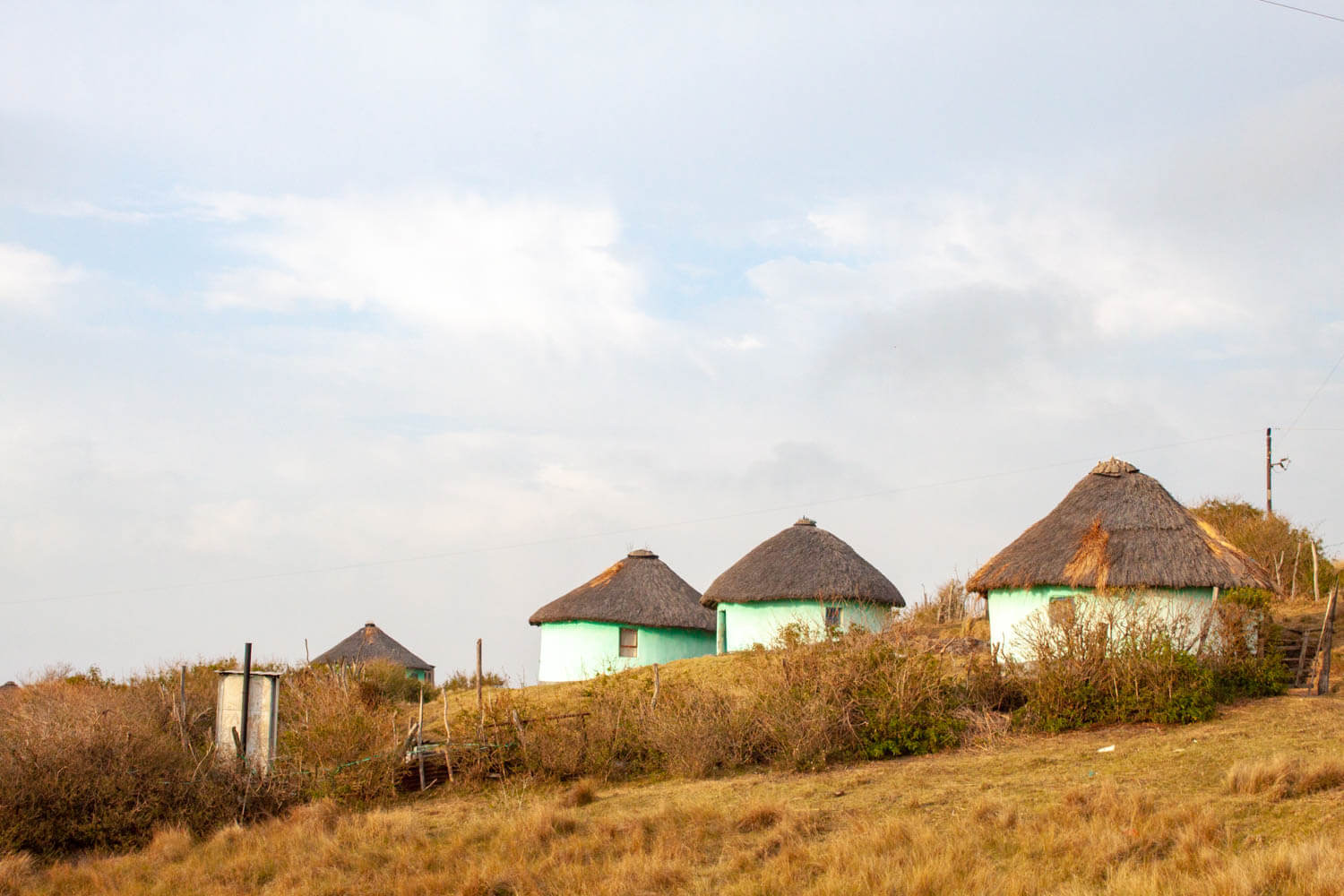 Related: How to Have an Even Better South Africa Road Trip than Ours

While there’s no debating that the Wild Coast is beautiful—its cliffs, coves, beaches, and rivers really are as stunning as everyone says—I’d have to say “wild” is a misnomer.

If you ask me, the Wild Coast has been tamed.

Farms claim just about every speck of land along it so, unless you think goats and cows are wild, it ain’t wild.

But maybe, as we experienced in today’s walk from Mdumbi to Coffee Bay, the definition of “wild” is slowly changing…

….along with everything else on the Wild Coast.

Partially because we wanted to take advantage of the perplexingly good WiFi at Mdumbi Backpackers, but mostly because of the relaxed feel of the place, we set out on our Mdumbi to Coffee Bay walk much later than usual, at around 9:40 a.m.

You can’t help but do things slower than usual here.

Though we were slow to start, the locals weren’t on this particular day.

All along the tidal flats, they were taking advantage of the spring tide, which takes the ocean extra far out and exposes more mussels, oysters, octopus, and fish to their reach.

Some offered to sell us their catch, but we declined. We’d already signed up for seafood dinner back at Mdumbi so we didn’t need it. Also, we’d been warned about issues with over-fishing so we didn’t want to risk contributing to the slow disappearance of sea life along the coast.

After forty minutes of walking along the coast, we reached the Mtata River.

There, we had planned to participate in a kayak race that an enterprising young guy from Mdumbi had organized to start at 10:00.

He’d done a decent job planning it, the first of what he hoped to make an annual event. A dozen or more kids and a couple of other tourists were waiting to race, and speakers were being set up to add to the atmosphere.

We sat on the river bank and waited for the race to begin.

And we waited some more.

By 11:30 the race had yet to start, and we were worried we wouldn’t have enough time to make it to Coffee Bay in time for our ride back, so we were sadly forced to drop out.

Fortunately, our absence wasn’t too sorely missed. That evening, the young organizer said he was pleased with the event and already had bigger plans for next year.

It was progress—slow progress, but certainly progress.

With no maps or signs to guide us the rest of the way from Mdumbi to Coffee Bay, we followed whatever faint trails we could find—trails that seemed to be used more by goats than by humans.

By sticking along the coast as much as possible it was impossible to get lost, though we sometimes had to backtrack when we hit impassable cliffs.

The walk rivaled our first hike at Cathedral Peak for our favorite trail in South Africa so far. Our only regret was that we didn’t set out earlier and go even farther (see Travel Tips below).

We couldn’t help but mozy along slower than usual to admire the scenery because everything—the sea, waves, beaches, rocks, vegetation, and cliffs—was eye-catching. Even the goats and cows were extra attractive in this setting!

Going at this typically leisurely Wild Coast pace, it took us another hour and forty minutes finally make it to Coffee Bay. 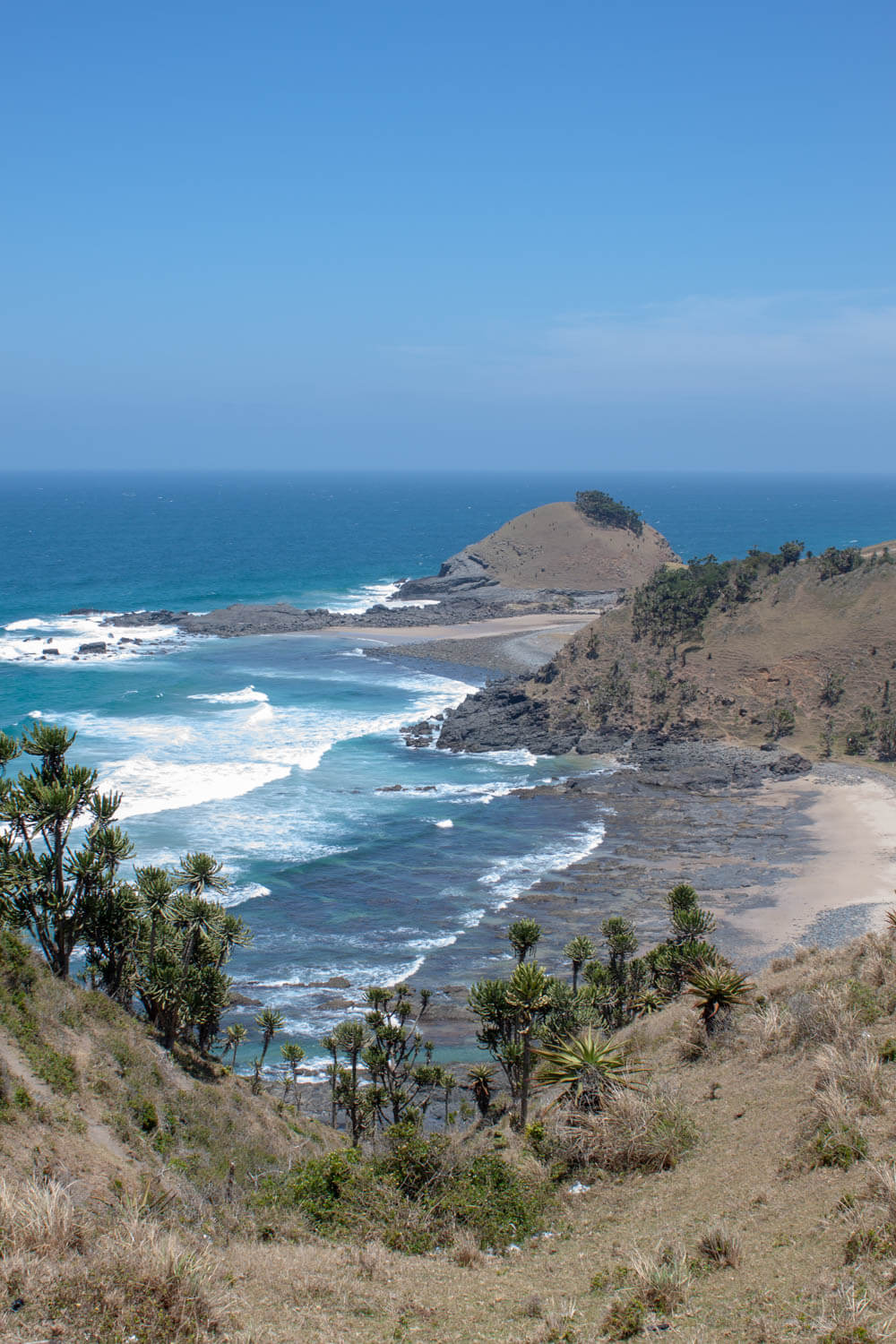 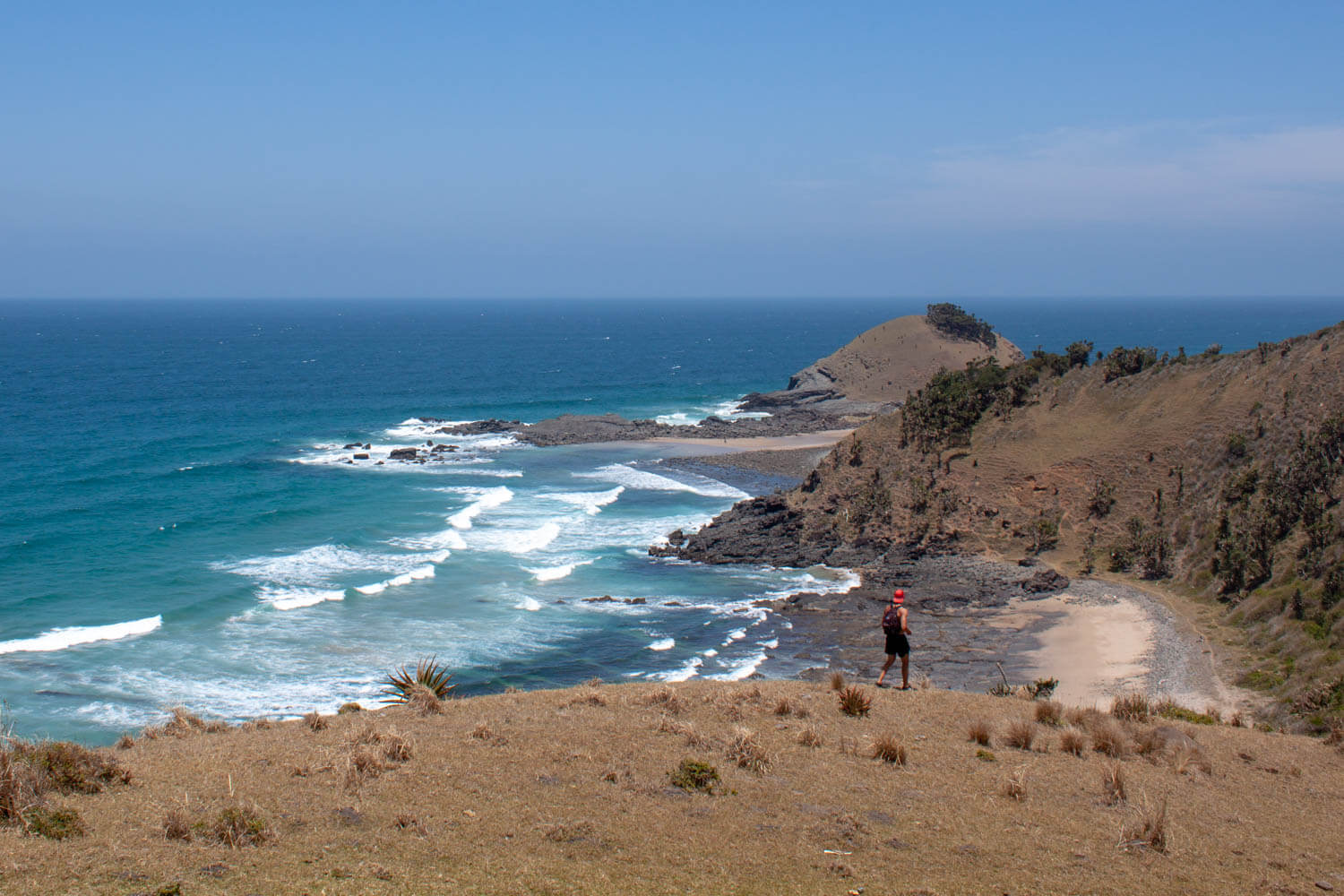 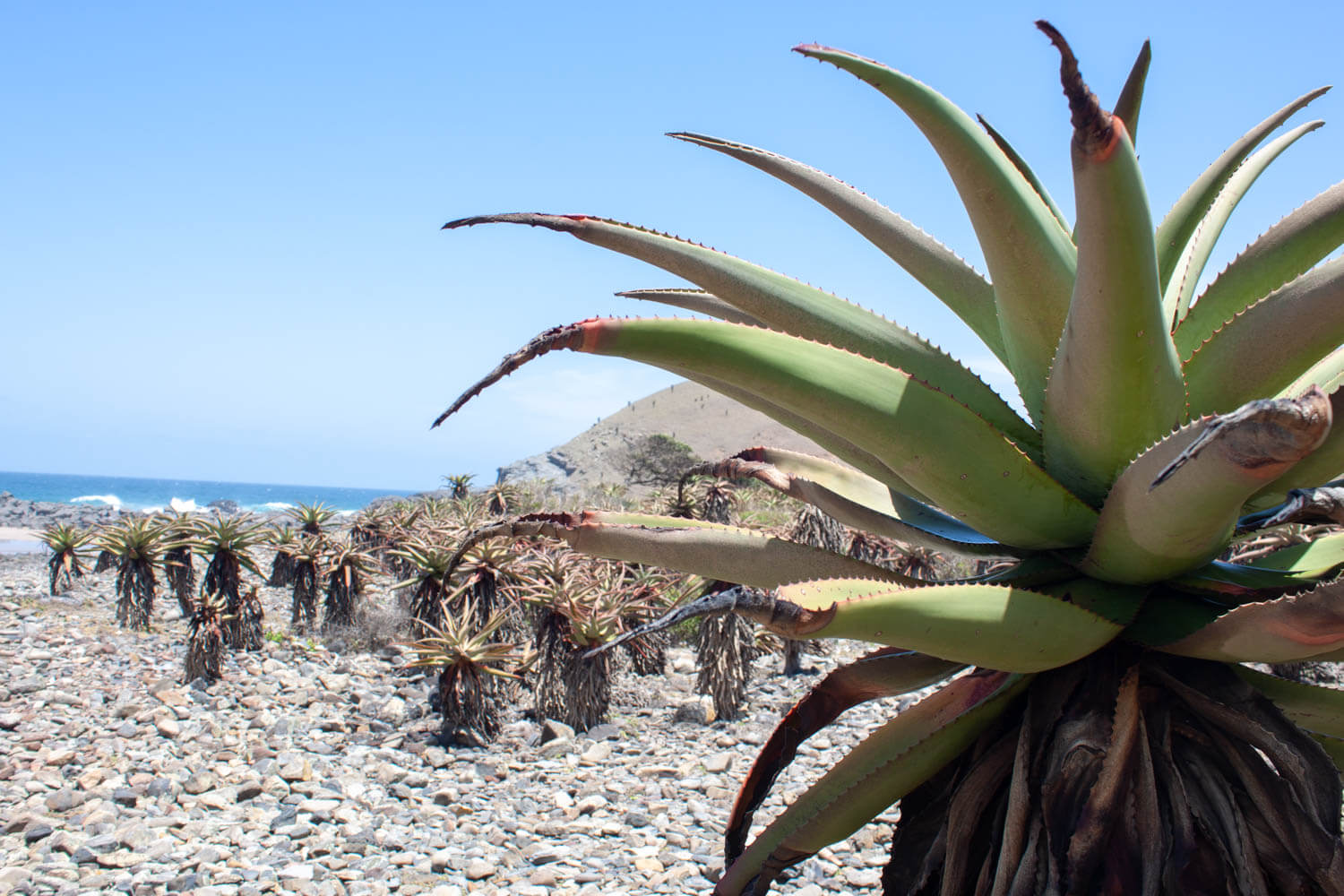 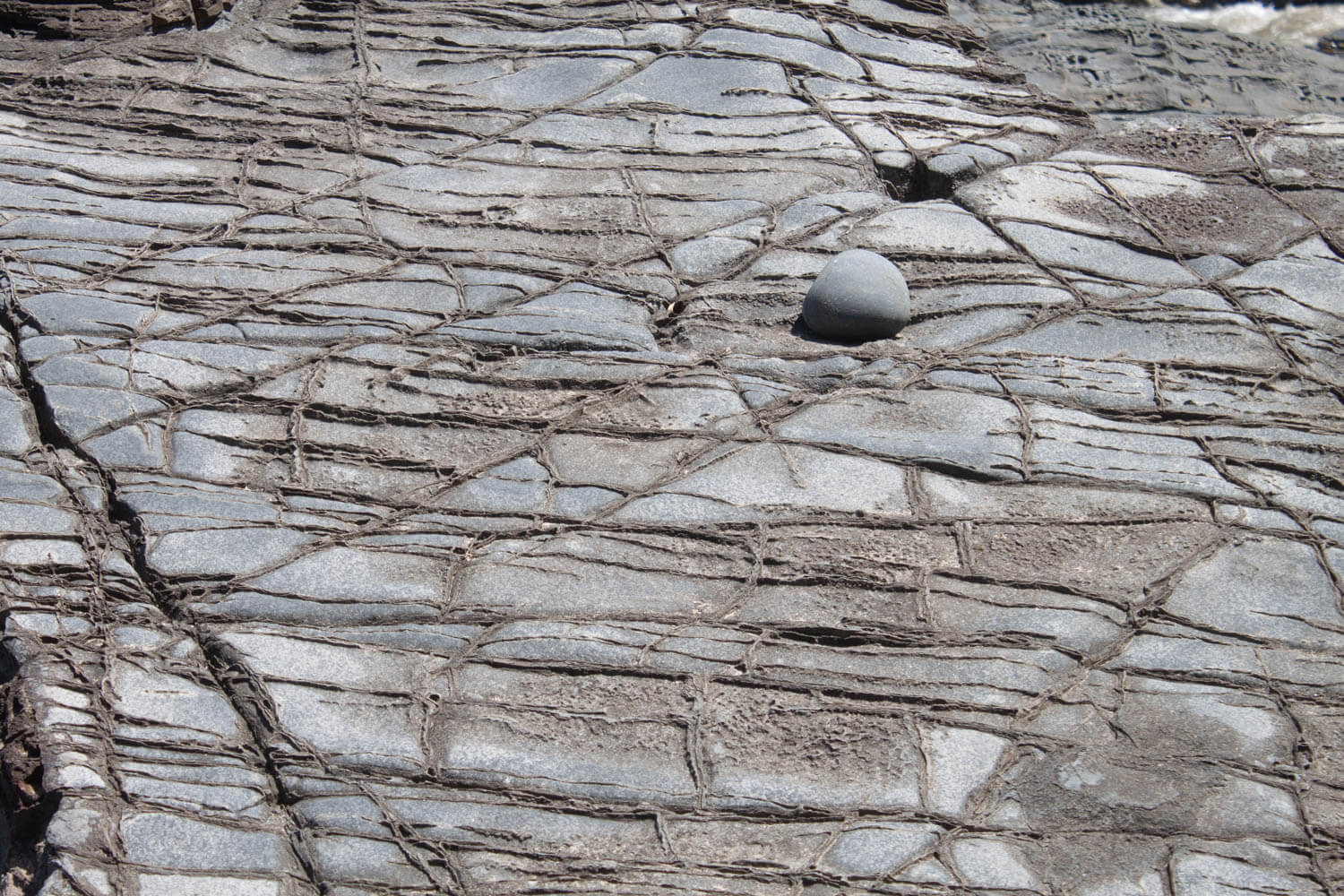 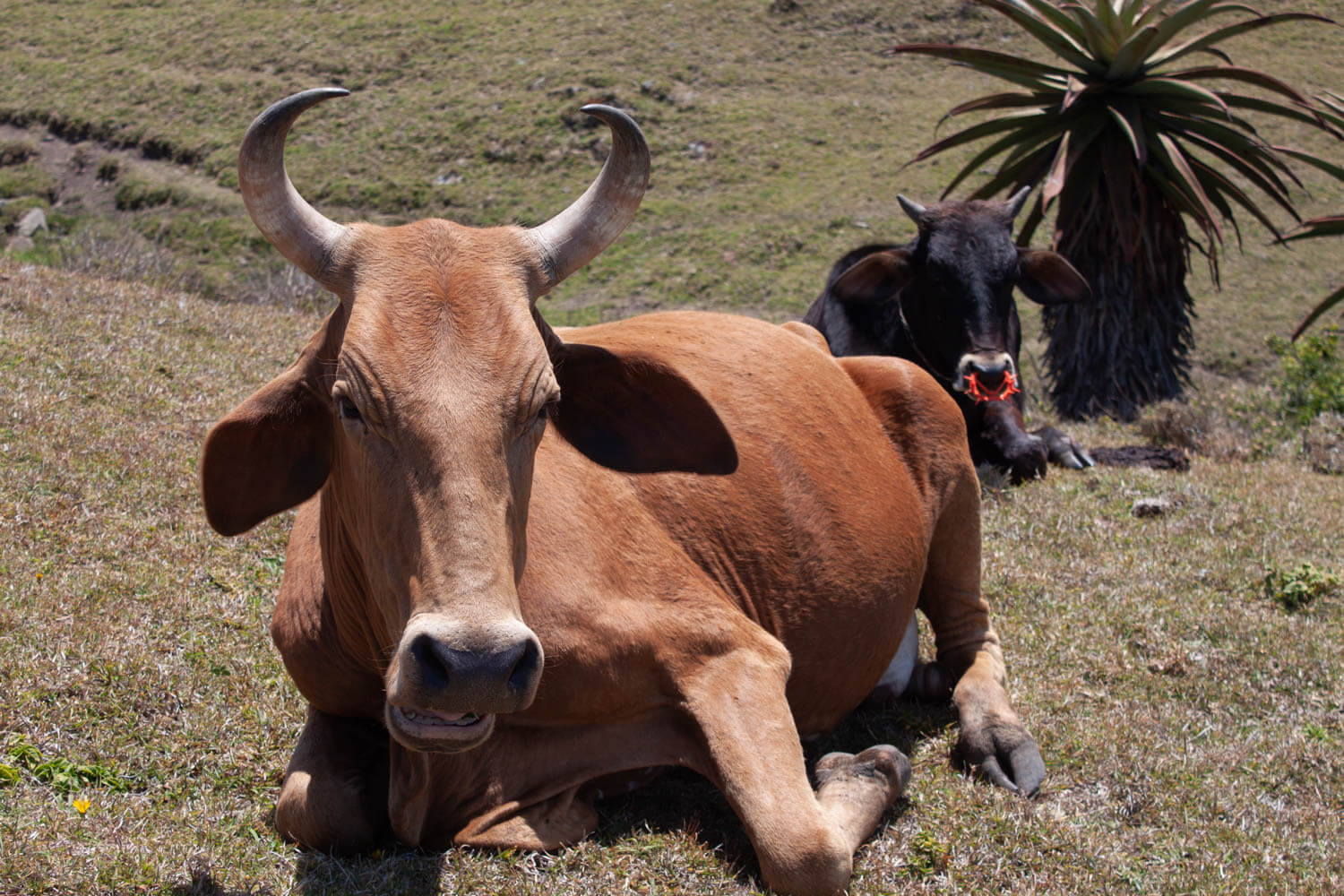 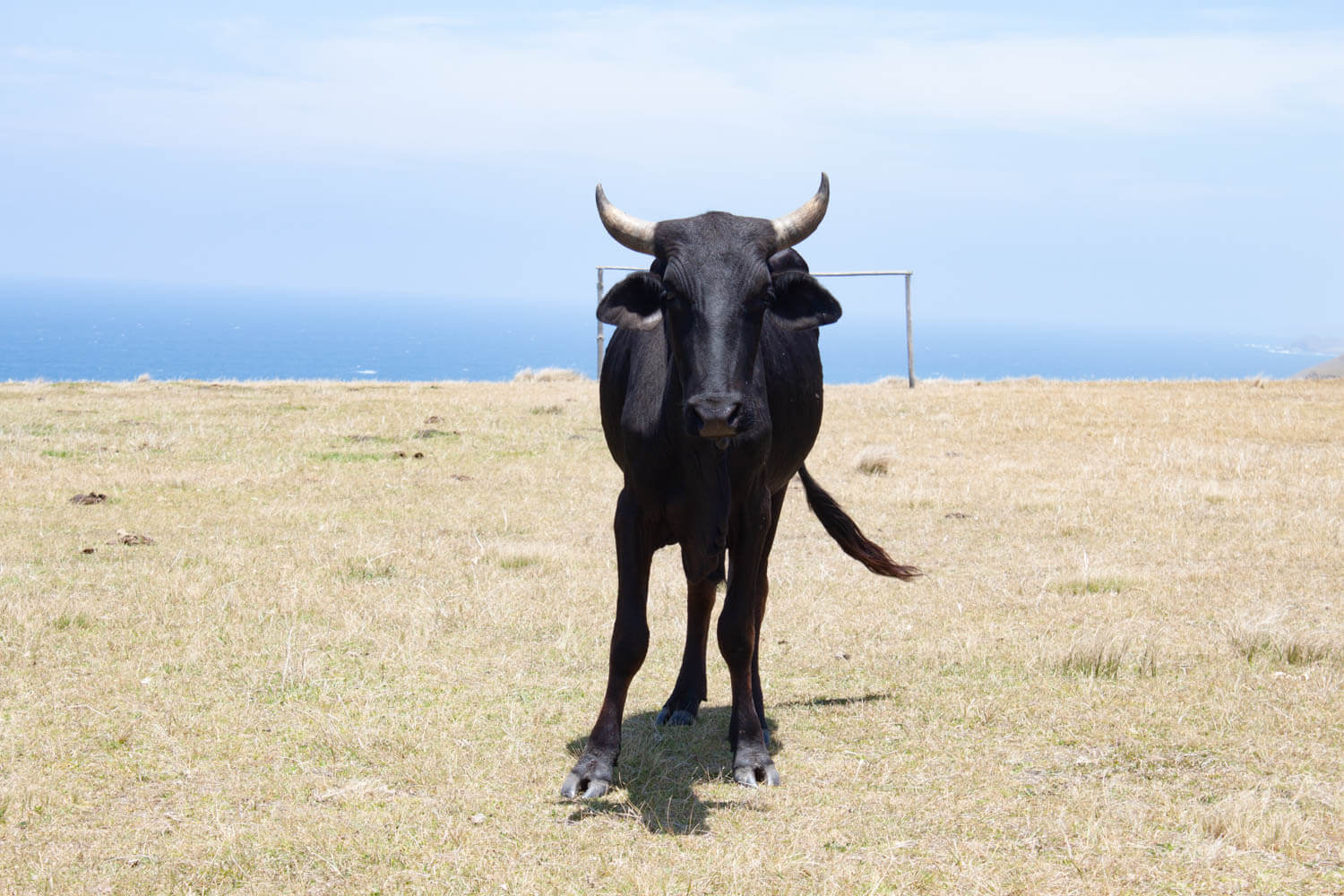 Not Our Cup of Coffee

What’s the opposite of “exceed”?

Whatever the word is, Coffee Bay did that with our expectations.

It felt kind of scummy.

Sketchy-looking young guys regularly approached us to sell us drugs, haphazard (over-)developments scattered the hills, and the staff and foreign tourists there seemed jaded.

On the bright side, local tourists from nearby towns (and not-so-nearby cities like East London, a 5-hour drive away) were having a great time enjoying a sunny Sunday off.

There was a bit too much drinking and noise from speakers for our liking, but it was all in good fun and nice to see this side of the local culture.

Quite a few of the weekending groups seemed just as interested in us as we were in them, too. They eagerly approached us to say hi and asked if we could take photos with them.

Overall it was a wild scene, just a different type of “wild” than expected. 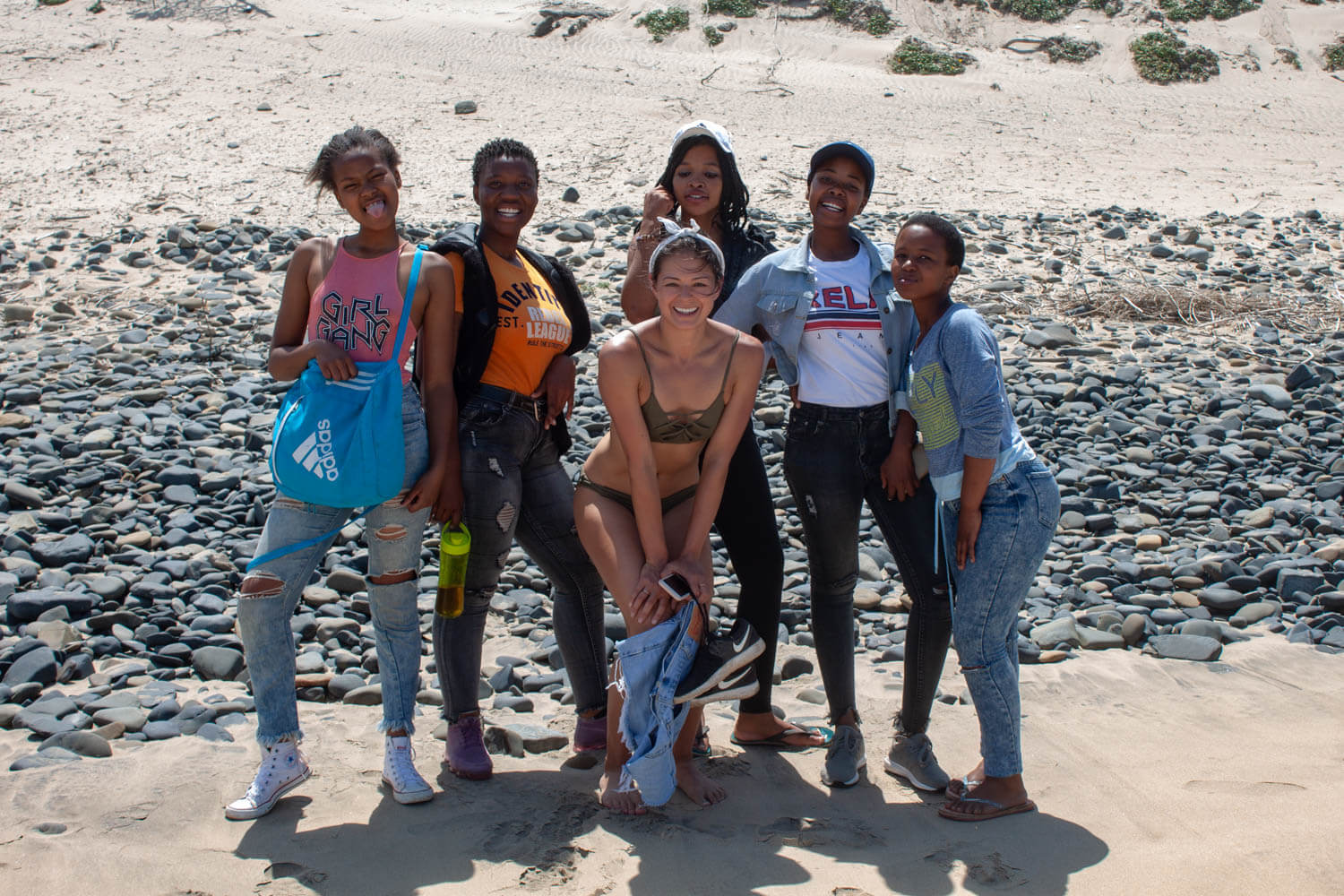 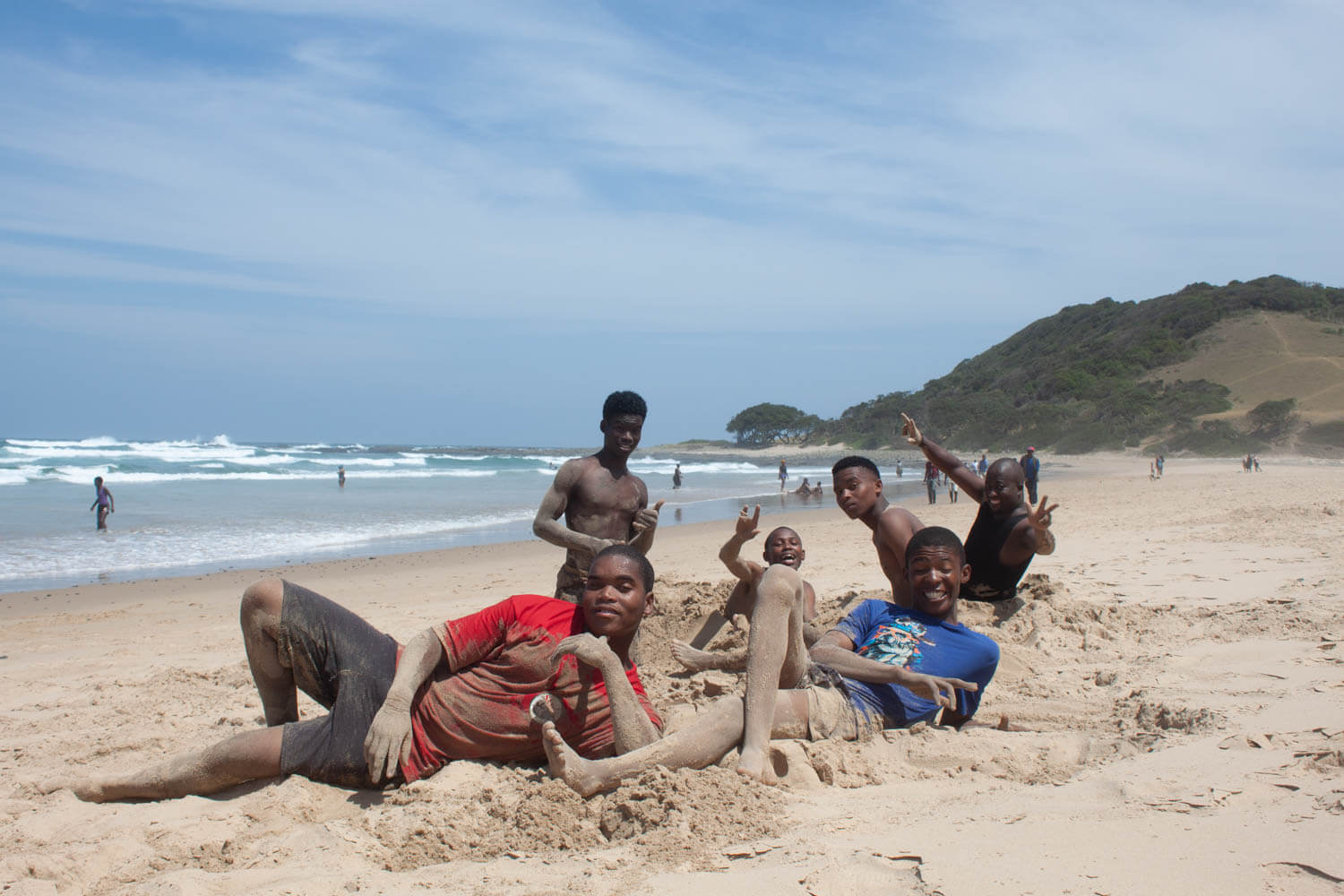 After waiting around for an hour longer than expected (of course), we met Sibongile, who drove us back from Coffee Bay to Mdumbi (70 rands each).

Sibongile has been working with Mdumbi Backpackers since its inception something like 15 years ago and had developed expertise in speaking English and interacting with tourists like us.

And he has big plans to take advantage of those skills.

He told us he’d recently purchased, from the local chief, a prime-located, 100-square-meter, river- and ocean-view plot of land nearby.

Guess how much he bought the property for.

Even for him, it was a cheap price, he admitted.

Construction is a bit more expensive but, slowly but surely, one 10-rand concrete brick at a time, he’s building some rondavels on his property that he hopes will one day become higher-end tourist accommodation.

We believe in him.

Based on today’s experience on the Wild Coast, progress may be slow—there is too much to appreciate and enjoy along the way to be in a rush after all—but it does happen eventually.

Hopefully, the progress is for the better and not for the worse.

Next Up (Hectic Route Day 8):
We Go From Slow to a Complete Stop in Cintsa 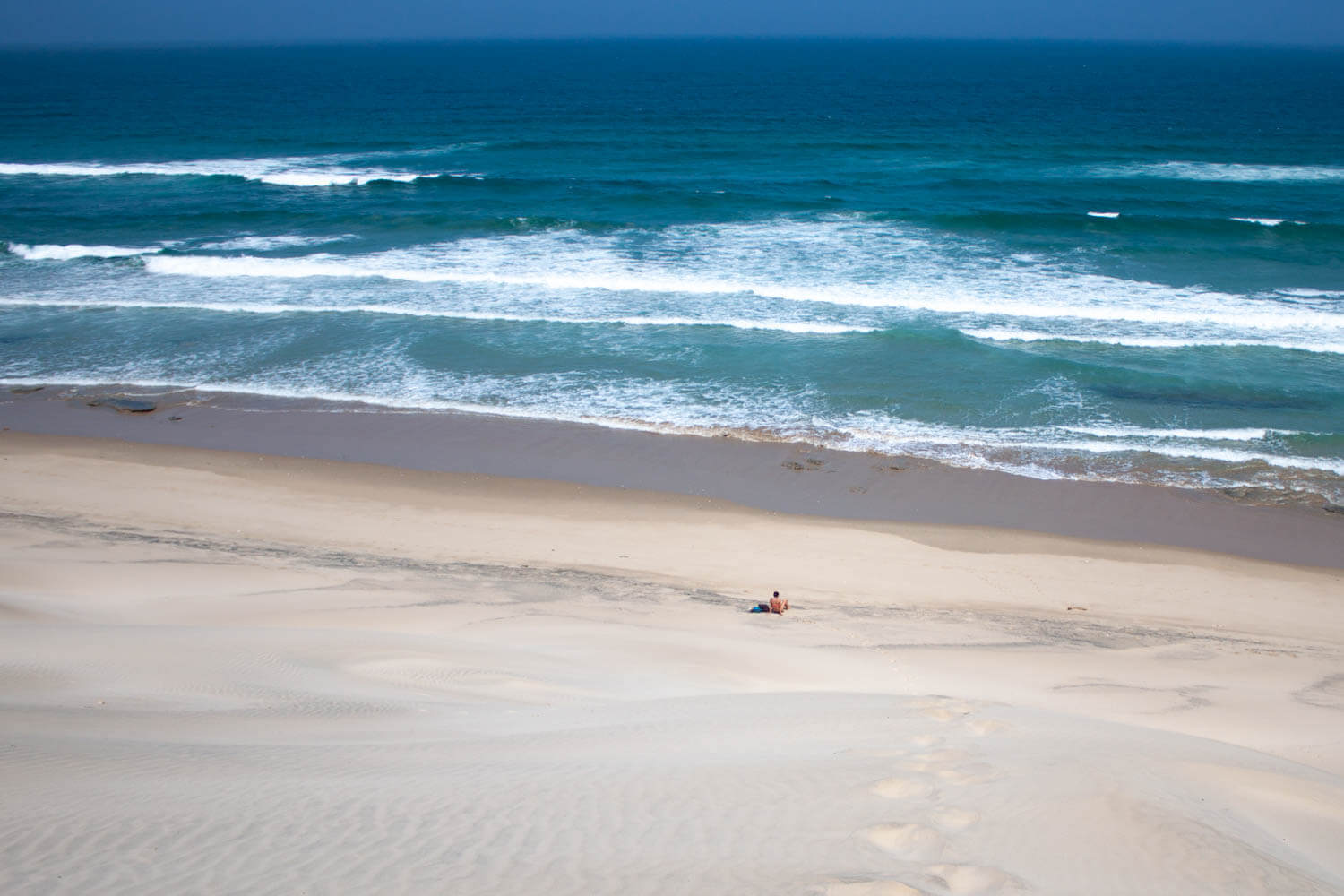 Continue Along the Hectic Route

For everything from safety tips to how to find the best rental car to what our absolute favorite experiences are, check out our South Africa road trip tips.