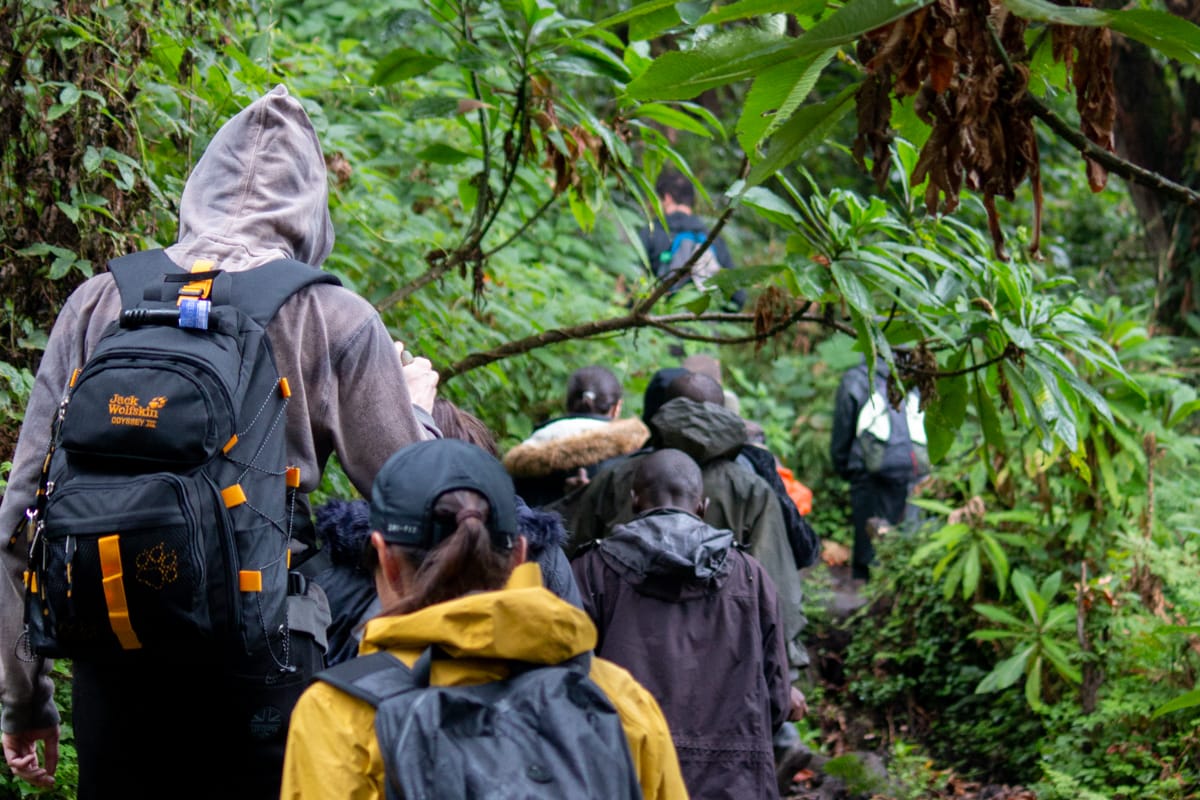 More than We’d Bargained For

This Mount Bisoke hike guide is one of four Unconventional Route blog posts about Rwanda. The others are Rwanda travel tips, Rwanda’s pros and cons, and Rwanda itinerary planning guide.

The hike up Mount Bisoke was more than we bargained for. A lot more.

In both good ways and bad.

Afterward, Kim and I and three others in our group discussed whether we thought it was worth it. The consensus: Absolutely! But we also agreed that we wouldn’t recommend it to all our friends.

The information online hadn’t explained well enough what to expect and how to prepare, so we’ve written this practical guide to hiking Mount Bisoke in Rwanda’s Volcanoes National Park in an attempt to rectify that.

Our goal is to help you decide if you should do it and, if so, be better prepared than we were.

Your experience hiking Mount Bisoke may differ from ours depending on the weather and the trail conditions.

We hiked Mount Bisoke at the end of January. This used to be the middle of Rwanda’s short dry season. Not so much these past few years, as locals told us. It rained intermittently during our hike and the trail was wet and muddy the whole way.

Our guide said the trail can get even worse in the heavy wet seasons, with mud up to your knees.

If you’re doing the hike in the long dry season (June, July, August) and your guide confirms the trail is dry, you may not need as much gear, but more water because of the heat. And you’ll probably be able to go up (and definitely down) faster and cleaner than us.

How to Prepare for the Mount Bisoke Hike

You can learn the hard way what stinging nettle looks like.

Kim did. She touched it with her bare hands… a couple of times. (Slow learner.) Her hand broke out in a hive-like rash. Lucky for Kim, her porter and savior Major (more on him later) soothed it with the juices of an aloe-looking plant.

Or you can learn the easy way.

Note the above photo and keeping an eye out to avoid it.

You’re supposed to get there by 7 a.m.

It takes just over half an hour to drive from Musanze to Volcanoes National Park HQ (location).

We learned this the hard way. Look for huge signs for the park when you get to Knigi and follow those instead.

Register and pay ($75) in advance online if you can.

We didn’t, so we had to deal with a crush of other trekkers and guides in a hurry to do the same because all the Volcano National Park activities—gorilla trekking, Dian Fossey, Mount Bisoke—start from here. The registration is simply a guy at a table on a laptop filling out the exact same online form you could fill out faster on your own.

No cash, as the fellow Bisoke hiker in front of us learned. He gave us his cash and we paid for him with our credit card.

Once registered, join the highest concentration of mzungus in all of Rwanda for free Question Coffee (Kim’s favorite in all or Rwanda), tea, and juice.

At around 7:30, everyone starts dispersing into different patches of grass around the HQ in a disorderly fashion. We had to ask around to figure out where the Bisoke group was. We were surprised and disheartened to find 10 others would be joining us. Some wore jeans and looked like the types who prefer to take an elevator rather than walk one flight of stairs.

(…unless you want extra time to indulge in the free coffee.)

It somehow took 40 minutes for our group to sign the insurance release forms while the guide shared mostly irrelevant information with us. We could have shown up at 7:40 a.m. and not missed a thing.

The worst road in Rwanda.

Our guide got into the best-equipped car of our group. The rest of us followed in a convoy. It’s only about 11km to the village where the hike (and the Dian Fossey tour and some gorilla treks) starts from, but it took 40 minutes. The last 3km was easily the roughest our poor rental Rav4 had to handle on our 8-day road trip around the country. If it were my car, there’d be no way I’d have done it.

They hand them out for free before you set off. If it’s been wet you’re going to need one. Maybe two.

We didn’t, but a few came along with us anyway. They knew better. One of them, Major, ended up being Kim’s saving grace. He told her where to step and pretty much held her hand the whole way. She was happy to tip him 10,000 RWF at the end for literally saving her ass. He also swapped shoes with another hiker, whose hiking boot’s sole ripped off near the top. Major lived up to his name.

That’s the elevation of the hike’s starting point. The top of Bisoke’s at 3,711 m/12,175 ft. We felt a bit light-headed at some points when we really had to exert ourselves, but generally, the altitude didn’t affect us or anyone else in the group.

It took our group 70 minutes. It’s a gradual uphill climb through fields of potatoes and flowers used for natural insect repellant, then some eucalyptus groves. Closer to the rest point, a few soldiers joined in to protect us from “the animals.”

Upon hearing the trail only gets steeper, harder, and slipperier from the Dian Fossey rest stop, a young Rwandan lady, a reasonably fit-looking 60-something-year-old American and his son dropped out. They had been misinformed that “anyone” could do the hike. While they were disappointed to have wasted their time and money, it was a good thing they turned around when they did.

As we hit Mount Bisoke’s steeper slopes, our group split up into smaller groups. Each went at their own pace, each accompanied by a porter and/or a guard. We stopped regularly to take photos of the impressive plant life and gigantic earthworms, listen for gorillas, and to catch our breath.

Altogether, it took us just over 3.5 hours from bottom to top.

Had Kim and I gone on our own, we could’ve shaved 30 to 45 minutes from that, but the mud, photo ops, and altitude made it more comfortable to go at the speed we did. To our surprise, the unathletic-looking people in jeans were only about 15 minutes slower.

Gorillas In Our Midst

We’d heard you can get lucky and see gorillas while hiking Mount Bisoke, so we crossed our fingers. Our guide couldn’t or wouldn’t give us an estimate of the likelihood of spotting some, but did say they’d seen them the day before.

About halfway between the Dian Fossey rest point and the top, we ran into some men on the trail. They were keeping an eye on one of the unhabituated gorilla groups… which happened to be right beside us! One guy pointed out an enormous silverback hiding out from the rain with his back to us no more than 20 feet away. The gorilla couldn’t care less about our presence.

On the way back down at about the same area, we saw another gorilla. This time, it was a smaller one. Relatively smaller; it’d still whoop our butts in a tug-of-war. It was in a tree and we got a real good look. One of the other hikers in our group who descended faster than us was even luckier. Four gorillas crossed the path right in front of him.

Our guide sternly warned us not to take any photos and not to get off the path for a closer look. We didn’t push our luck but did disregard his appeals to get a move on. We watched the gorilla eat leaves for roughly 7 minutes.

We couldn’t see a thing because all or Mount Bisoke was socked in the middle of thick clouds. Nobody cared too much. We were happier to have made it to the top and have seen gorillas than disappointed to not be able to see the crater. Had we not seen any gorillas, that might have been a different story.

It was cold enough to see our breath and numb our fingers, so our group scarfed down some quick snacks, drank some water, took photos of the mist, then set off on the dreaded descent.

Going down was less strenuous but more challenging, so it took 45 minutes longer than going up. It was nearly as much of a mental challenge as a physical one, as we had to keep constant focus on our balance and which route and steps to take to minimize the risk of wiping out. I mostly enjoyed the challenge, Kim less so, and for others it was torture.

I was fortunate to only have one major wipe-out. Even with Major’s help, Kim had about seven crashes and was sore the next day. Another Argentinian guy we were with got so shell-shocked from the constant wipe-outs that, as a final coup de grâce, he even fell off the flat trail at the bottom.

Kim gave Major 10,000 RWF. She also gave 5,000 RWF to another porter who mostly helped others but didn’t get any tips from them. Our guide, who we didn’t tip because he was a prick didn’t do anything to help anyone or offer any interesting information, said the porters do get paid by the park, too.

Five of us hung out at the Beyond the Gorillas Experience Camp across from the parking lot to decompress. I tipped someone 500 RWF for thoroughly washing my shoes, then joined the others inside the restaurant hut for tea. They sold beer and other refreshments, too. As a welcome touch for our cold, wet, and dirty feet they put a pot with burning charcoals under our table.

Hanging around drinking tea until 5:45 p.m. was a mistake because we ended up having to drive most of the way back to Musanze in the dark. Driving in the dark was even more unnerving than the hike down. On a couple of occasions, oncoming army trucks and buses veered into our lane as if they didn’t see us and ran us off the road. And the whole way pedestrians and cyclists casually meandered onto our lane as if they weren’t nearly invisible. We were relieved to make it back to our guesthouse without having injured ourselves or anyone else.

The perks of a great guesthouse.

We were so grateful to be staying at La Locanda Guesthouse in Musanze. The hot shower in our room was bliss, they put our shoes by the fireplace to dry, they had a warm meal at their restaurant, and they even washed our clothes in time for our departure the next morning.

Due to uncertainty about the weather, seeing gorillas, and visibility at the top, we can’t tell you what to expect.

We can pretty much guarantee one thing, though:

It’ll be an experience.

At times during the hike, it wasn’t the most pleasant experience, but by the time we were back at the bottom drinking tea, everyone who’d completed the hike was glad they’d done it.

Hopefully, if you decide to hike Mount Bisoke, you’ll feel the same.

Rwanda Travel Tips: Dos and Don’ts to Know Before You Go

Is Rwanda Worth Visiting?