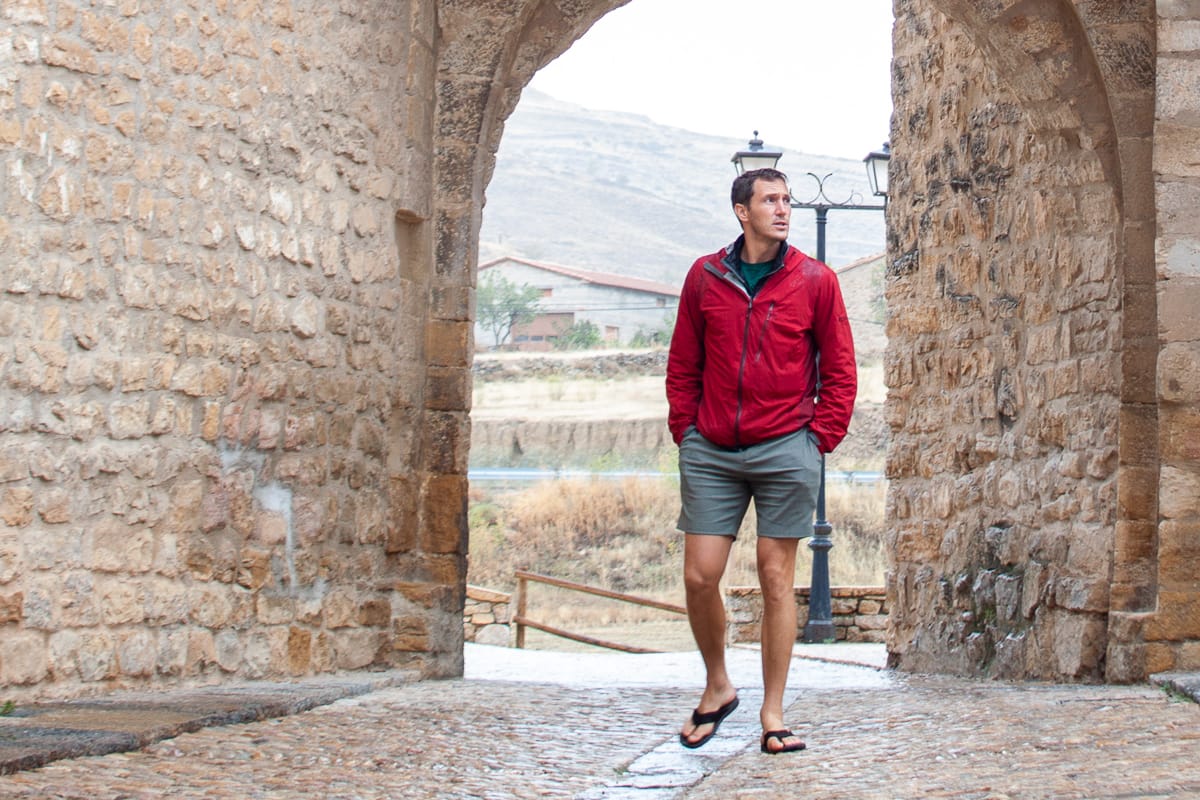 If you enjoy this guide to how to get off the beaten path in Spain, check out our honest assessment of if Valencia’s worth visiting, the best countries to visit for various unique types of trip, and top travel tips and tricks. Or don’t take any of our tips and make your own discoveries!

For some stupid reason, when Kim and I moved to Valencia, we didn’t expect to find many off-the-beaten-path highlights in Spain.

We somehow got it stuck in our brains that Spain was all about its tourist-trampled cities like Barcelona, Seville, San Sebastian, and Madrid. It didn’t have small, enchanting villages like France or Italy, either.

Luckily, our Spanish friends showed us we were mistaken. They introduced us to an off-the-beaten-path side of Spain that blew away our un-expectations.

We met David and Desiree over mutually punctured tires in Namibia. When we told them we were moving to Valencia, they said we had to come visit them in Seville. So we did.

We thought we’d be hanging around the city for a few days.

They had different plans: to show us their favorite off-the-beaten-path places in Southern Spain.

We barely even saw Seville!

Desiree’s been to coastal Chipiona to escape the Southern Spain swelter ever since she was little. But it’s still not popular with foreign tourists. That’s because rather than woo outsiders with beauty and charm, it satisfies insiders with a friendly feel and food.

Lots of food. Almost too much food.

First David and Desiree took us to Despacho de Vinos to fill up our plastic bottles with straight-from-the-barrel sherry. Continuing to the seaside promenade, we ordered Spanish ham, mini shrimp, fried almonds, and dried tuna tapas from Proamar. We then walked down the beach to portside Cantina Marinera for an informal, familiar, and fantastic seafood feast. And, finally, we filled our second stomachs with turrón gelato from Margarita la Fresca.

Kim remembers her dad drinking a glass or two of sweet Sherry with dinner when she was little, but she’d never had any herself.

And neither she nor I had any idea that the name comes from us English-speakers mangling a foreign word, “Jerez,” the Andalusian city it comes from.

So out of curiosity, we paid a visit to Bodega Lustau. They turned our ignorance into interest, insight… and indulgence.

On a tour of the historic bodega, we tasted a surprisingly wide range of sherry variants (some aren’t even sweet!), learned the unique way it’s made by mixing vintages (which means every cup has traces of VERY old sherry), and overall learned to appreciate this overlooked part of Spanish culture.

Kim and I have since enjoyed more than a couple drinks of sherry, ahem, jerez.

(Heads up: Other than to learn about and taste sherry, Jerez didn’t seem too interesting.)

The World’s Most Expensive Ham

Two hours northeast of Seville, Cortegana is in the heart of ham-land. And not just any ham: jamón Iberico, Spain’s internationally-renowned delicacy.

There, we had the honor of meeting Eduardo Donato. A reformed Catalonian real estate exec, Eduardo followed his own unconventional route. Twenty years ago he bought farmland outside of town and started raising a nearly extinct breed of pig, Manchado de Jabugo. Naysayers warned him they took too long to grow and nobody would buy it. He showed them otherwise.

As he toured us through his farm in the Spanish Dehesa, he told us the whole story and showed us his prized pigs, which are now the most prized in the world. Each leg sells for €4,100, making it the most expensive ham in the world.

Unable to afford a slice, we bought and ate some much cheaper, but still expensive ham, beside the castle above town.

During the blueberry baron era of my pretirement, I shared a Vancouver apartment for a few months with a young Spanish guy named Oscar. He proudly raved about the quality of life, food, and wine in his hometown of Cárcar and invited me to visit any time.

Five years later, Oscar was back in Northern Spain and Kim and I took him up on his offer. And he proved he wasn’t exaggerating.

In between the best farm-to-face feasting we’ve ever enjoyed on his family’s farm, Oscar led us well off the beaten path in Northern Spain and made us wish we’d come sooner.

On our way to Cárcar from Valencia, we stopped by San Ramon de Cameros. Kim had seen it was hosting the Dia del Camero Viejo Festival, an annual event that rotates around Rioja’s small towns to reinvigorate them with games, expos, food, and drink. We figured at the very least it’d be an opportunity to taste some Rioja wine for cheap.

Like our previous experience going off the beaten path in Southern Spain, it proved to be way more than that.

The ancient, tiny town with old brick buildings that looked almost Swiss easily rivaled any in Italy or France. And it was hopping with residents of the nearby city of Logroño having a great time celebrating their history and culture. They were surprised us Canadians had found about their party but more than happy to have us join.

The Downhill Running of the Cows

Like the famous running of the bulls in Pamplona, everyone dresses in traditional white and red, big brass bands wake up the crowds, and people are drinking beers way too early. The difference was we were the only tourists. Oh, and instead of bulls running through city streets, horned cows hurtled down a steep hill after the locos who tried to outrun them.

Since we’d already experienced Falses’ version of the running of the bulls, we didn’t mind missing Pamplona’s much more popular and touristed equivalent.

On a day trip to San Sebastian, we popped over the border to Saint-Jean-de-Luz, a beachside resort town. Pourquoi pas?

What a difference a 25-minute drive can make!

Though still in Basque country, the cafés, artisanal shops, and excellent market had a notably more elegant (some would say snobby) French feel. And way better bread, chocolate, and pastries.

At Oscar and his family’s suggestion, we wandered these spellbinding towns’ winding medieval streets in between wining (at Olite’s Bodegas Ochoa) and dining (at Ujue’s Pastas Urrutia, my favorite hearty menu del dia lunch in all of Spain).

Invigorated by the off-the-beaten-path treasures our friends showed us in Northern and Southern Spain, Kim and I ventured from Valencia to see what Central Spain might have buried deep below its touristy Top 10.

If we had to bet on one place going from off-the-beaten-path in Spain to becoming a trampled tourist attraction, it’d be Albarracín. With its pink-ish buildings, medieval walls, and secluded stony hill surroundings it has all the makings of becoming the next Instagram sensation.

But for now, it’s still quiet, especially in the morning. That’s why it was our favorite off-the-beaten-path place in Spain we visited.

The Spaniards agree. They recently voted Albarracín as their country’s most beautiful village. It’s only a matter of time before that nomination gets translated into English and the rest of the world shows up.

Serra d’Irta National Park, one and a half hours north of Valencia, is one of the last remaining swaths of undeveloped nature along Spain’s Mediterranean coast.

Maybe it’s the Canadian in us, but after months in Spanish cities and towns, Kim and I relished the opportunity to escape from humanity and enjoy a seaside picnic on the rocks, in nature, with nobody around.

Sparsely populated and even less touristed, especially by foreigners, the Maestrazgo is a hilly, mushroom forest filled region northwest of Valencia. Spaced out every twenty kilometers are so are dramatically-located medieval villages like Cantavieja, Mirambel, and Morella.

We enjoyed a couple of very chill days escaping the lowland heat and humidity to pueblo hop, forage for mushrooms, drink vermouth, and eat tapas.

Tip: Chefs should stock up on local dried mushrooms and truffles, which Morella is famous for.

The Big City that Doesn’t Know it Yet

See our Valencia Off-the-Beaten-Path City Guide for all our favorite things do see, do, and eat we experienced during the time we lived there.

A Whole Lot More Off the Beaten Path

Even if you want to spend most of your time in Spain’s famous cities, also plan to travel somewhere (anywhere!) off the beaten path.

It’s way easier and more rewarding than it should be given the country’s popularity and convenient Western European location. We bet that’s where you’ll find your fondest memories.

The same goes for everything in life. To be inspired to live a bit more off-the-beaten-path, sign up for our unconventional newsletter:

Is Valencia Worth Visiting? Yes and No. Here’s Why