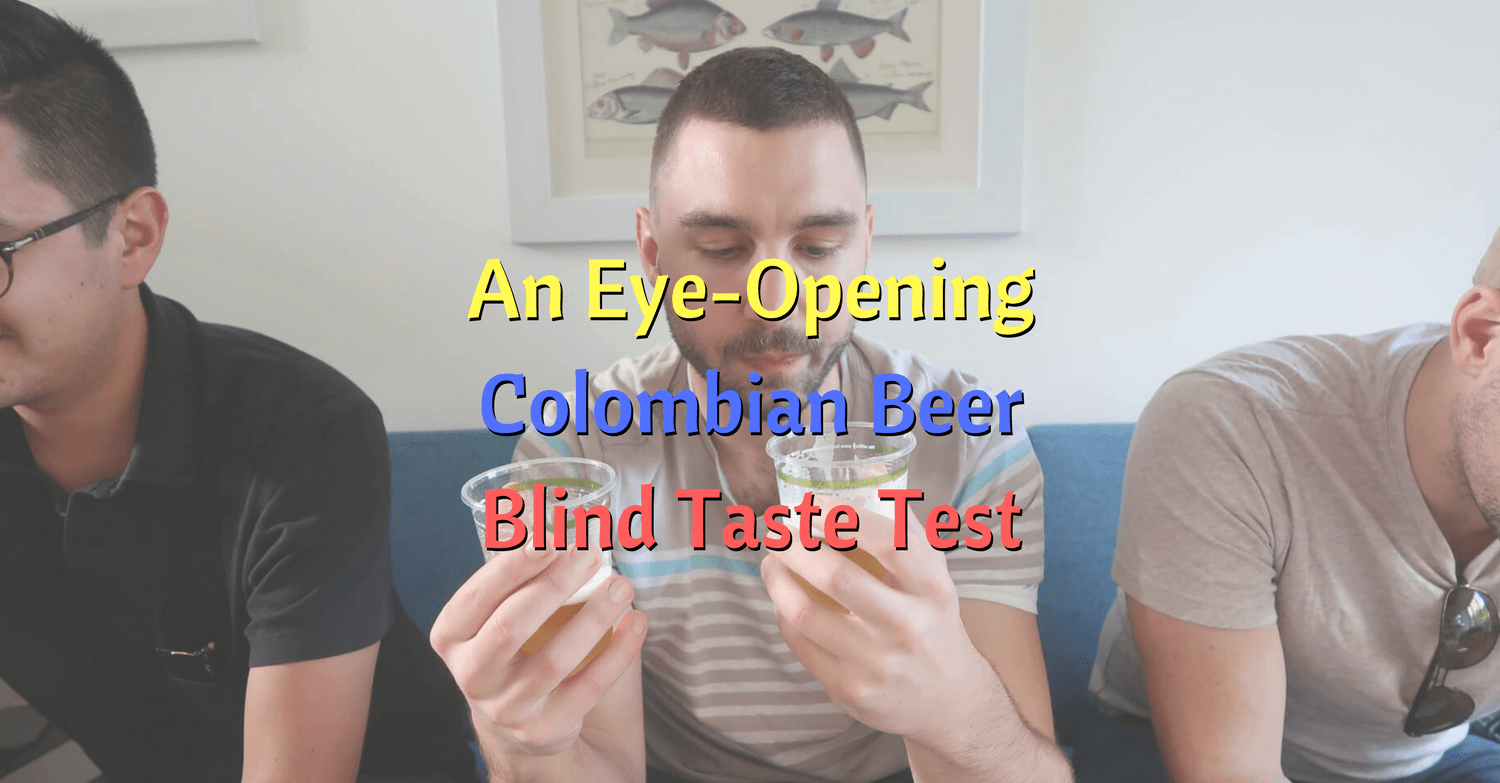 What Happens When the Labels Are Off?

Nothing’s better than a beer to cool off from a hot day in Colombia. But which is the best Colombian beer for doing so?

Are the two mainstay Colombian beers, Aguila and Pilsen, any good or is it worth it to “splurge” (i.e. drop an extra 20-40 cents) for a Club Colombia? Or is it maybe worth it to get a craft beer for twice the price?

…with a blind taste test!

For the test, we rounded up five friends and nine different lager-style beers commonly found here in Medellin. Our non-beer-drinking friend (poor thing) served us two different beers at a time. Each beer was served in a plastic cup coded with a number and as we sipped, we took notes. Once we got through all ten (one beer was poured twice as control), we had the chance to re-taste any of the beers before finalizing our individual rankings.

Here are the consolidated results, from worst to best.

Not a good start for the Colombia macro-breweries! Colombia’s top-selling beer fell flat on the bottom of our rankings, and it wasn’t even close.

“A balance of bitterness, sweetness, alcohol, and originality. A beer to relax, liven up, and celebrate.”

Ouch! First Aguila, now Pilsen. The #1 and #2 most popular beers in Medellin were by far the #1 and #2 least liked beers in the test. Maybe it’s our foreign taste buds?

“The classically Paisa-flavored beer that takes you everywhere.”

Costeña is brewed by Bavaria Brewing, the same company that makes Aguila. Despite being the cheaper brand, it was roundly preferred by our tasters.

“Costeña was launched in 1934 with the promise of being a beer with a unique and characteristic dry and bitter taste.”

BBC is the most prevalent high-end beer around Colombia. At bars and restaurants, it typically costs around twice as much as the other beers. Their lager definitely wasn’t twice as appreciated by our tasters, though.

“A lager fermented at low temperatures, stored in the cold for months, not weeks, is a delicious, smooth, and frothy beverage.”

Prima is brewed by Colombia’s biggest supermarket chain, Grupo Exito. It’s the cheapest beer we’ve come across in the country. For some reason,  it’s not available in any bars or restaurants, but based on our taste test it may be worth it for Exito to consider expanding the brand.

Nothing. Prima is apparently too budget to merit it’s own website, social media, or any marketing collateral at all.

Apóstol, with a beer-brandishing monk on its label, is a Colombia-based European-style brewery. Maybe it’s because of their European roots that their lager stood out for not being as light and refreshing as the others in the blind taste test.

“Helles is a golden lager-style beer with a balanced malty smell and taste. It has smoky notes, is moderately bitter, easy to drink, and refreshing.”

My perception has always been, and will remain, that Heineken is all about branding and not at all about beer. But maybe I’m wrong, because even when the brand was concealed, most tasters enjoyed the taste (just not me).

“Heineken is a premium beer—open, cosmopolitan, and modern—that was brewed following the highest quality standards. This drink is the result of the true art of brewing: it’s creation is a 100% natural process, full of mysticism and focused on quality.”

Club Colombia is the premium line of the same company that makes Aguila and Costeña. I used to think people who paid extra for Club Colombia’s lager mostly did so to separate themselves from the common folk who drink Aguila. But maybe some people buy it because it truly tastes better!

“It has a golden color, characteristic of beers brewed with malted barley and caramel malt, which gives it a shine and taste of its own, making it the perfect choice to exalt in any moment.”

Corona is a cliche warm weather beer, not anything a true connoisseur would ever be caught dead drinking. Mexicans themselves don’t even like it! And we liked it the most. Well congrats Corona, you won the crown you’re named after.

Aside from a few not-so-good tasting beers and a couple favorites, we had a hard time distinguishing between the Colombian beers we tested. We ended up concluding that the lagers commonly available in Colombia are pretty much all the same (especially after you’ve had a few).

Our recommendation? Do your own Colombian beer taste test and let us know how it turns out.

And meanwhile, when in doubt, go for the cheapest beer.

And When You’re Not Drinking…

If you’re planning on doing more than just drink beer in Colombia, you can find exclusive tips and recommendations in our Medellin travel guide.

You might also be interested in  the results of other Colombian taste tests we’ve done to find the best Colombian coffee, cheese, and aguardiente.

And use our Blind Taste Test Guide to organize your own blind taste test and come up with some fun ideas.

20 thoughts on “The Best Colombian Beer: Rankings from a Blind Taste Test”